And the travels and adventures of the “World’s #1 Trackchaser” 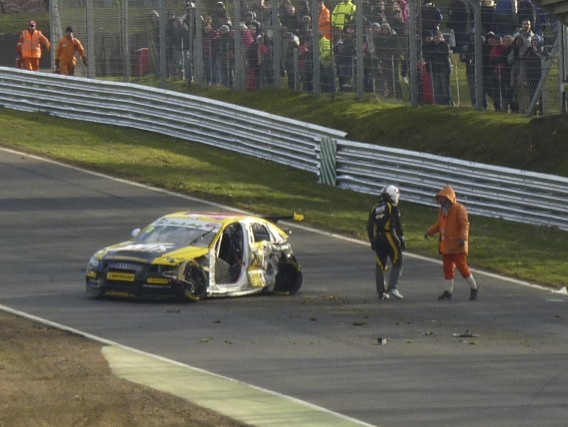 In the UK there are no rainouts.  It rains often and they just ignore it and go on racing regardless of whether the racing surface is shale (dirt) or tarmac (asphalt).  This protects the fans that come from long distances.  They will get to see a race.  In the USA if it rains hard for 10 or 15 minutes during the program at a dirt track they will probably cancel the show.  I’ve seen several events canceled the day before or the morning before the race because they had a hard rain.

Most of the major racing series in the USA start the faster cars up front (World of Outlaws, NASCAR, Lucas Oil, etc).  This results in little or no passing.  In the UK the best guys start in the back.  Not only do they start in the back they are placed about ¾ of a lap behind the lead car when the race starts.  Nevertheless, the fast cars still race to the front in 20 lap races.  You can watch an entire World of Outlaws program and see only 4 or 5 passes for the lead in the ENTIRE night.

In the USA if a car spins or stops on the track a yellow flag is thrown.  It’s not unusual to have 30 or 40 yellow flags in one evening.  This really delays the show.  Also in the USA when a yellow is thrown the scorer has to reline up the cars and this takes additional time.  In the UK when a spin happens or a car is disabled on the track there is rarely a yellow.  Can you imagine Billy Moyer spinning to a stop on the front stretch at Eldora facing oncoming traffic right under the flag stand and they CONTINUE to race?  That’s exactly what the UK does.  This keeps the show moving although I’m not sure the drivers think much of it. 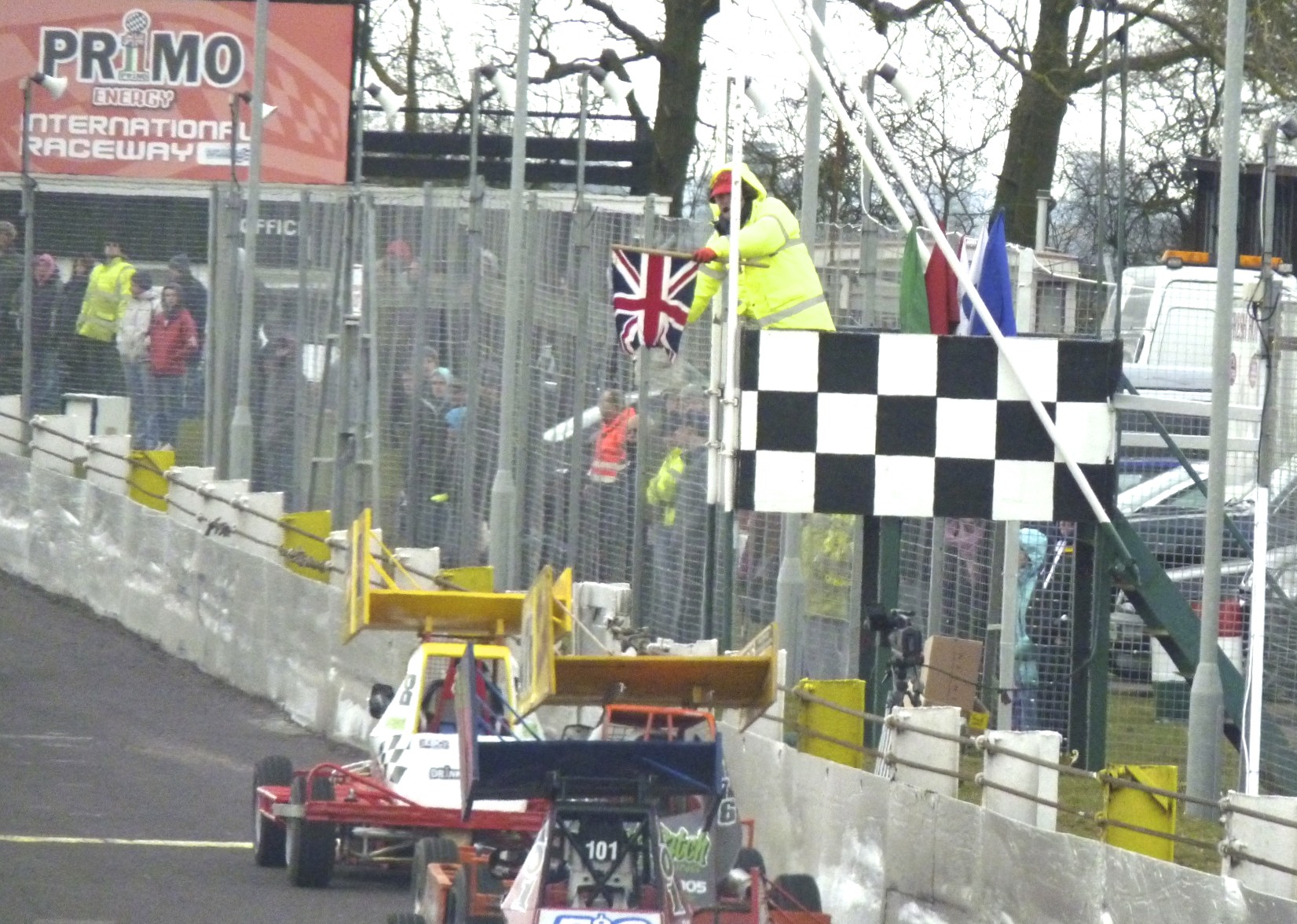 In the UK the starter keeps very busy.  Almost all starters indicate with their fingers, every lap, on who the top 5 and sometimes the top 10 cars are as they pass the flag stand.  They show a special flag, the Union Jack, as a halfway marker.  They also have wooden paddles with numbers 1-5 on them.  With 5 laps left they begin to show the paddles.  The flagmen in the USA pretty much just throw the green and hold the yellow flag.  One of the best starters I saw in the UK was Graham Alexander at Cowdenbeath Racewall.  The left-handed flagger puts a little showmanship into his effort.

The winner:  No contest.  USA

In the UK most drivers don’t wear driving gloves.  The roll cages in the lower divisions don’t look very strong.  Also, kids of all ages are roaming the pits and it’s very crowded in the pits.  The “no yellow” flag idea probably increases the chance for driver injury.  These points are not much of a problem in the USA 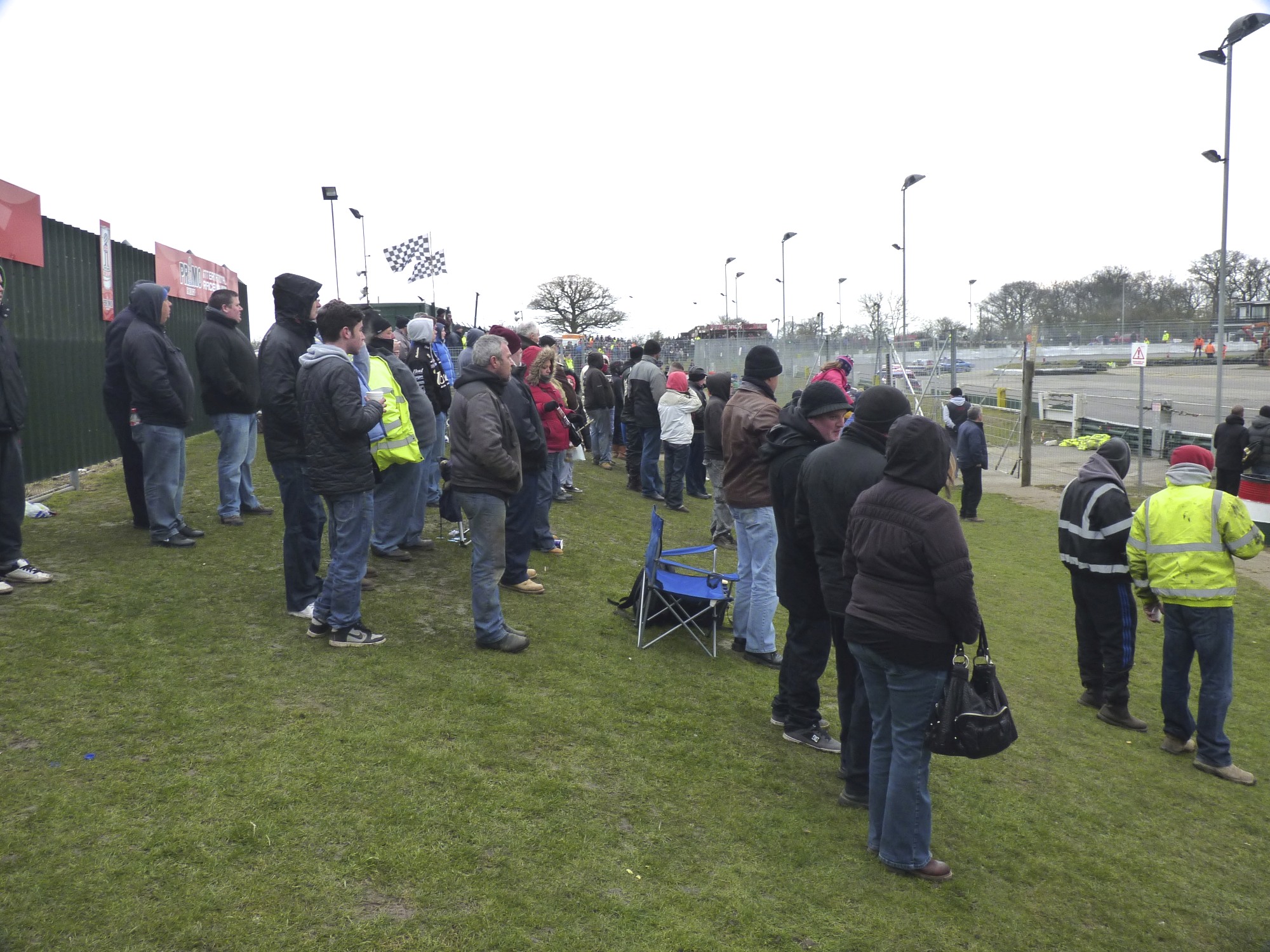 You won’t see a grandstand very often at a U.K. short track.

Most of the tracks I’ve seen in the UK look like they are right out of the 1950s.  There is almost no formal seating (grandstands) at the oval track.  Because of the climate, most tracks do have areas that are covered.  The majority of seats are not really seats but places for people to stand.  In the USA, at virtually every track the seating, parking, lighting, etc is superior.

I was impressed with the UK commentators.  Sometimes the public address speaker system left a little to be desired.  On the other hand announcers in the USA are pretty good as well.  Of course, there are exceptions.

The UK was near perfect in this area.  The USA has a lot of work to do with starting on time. 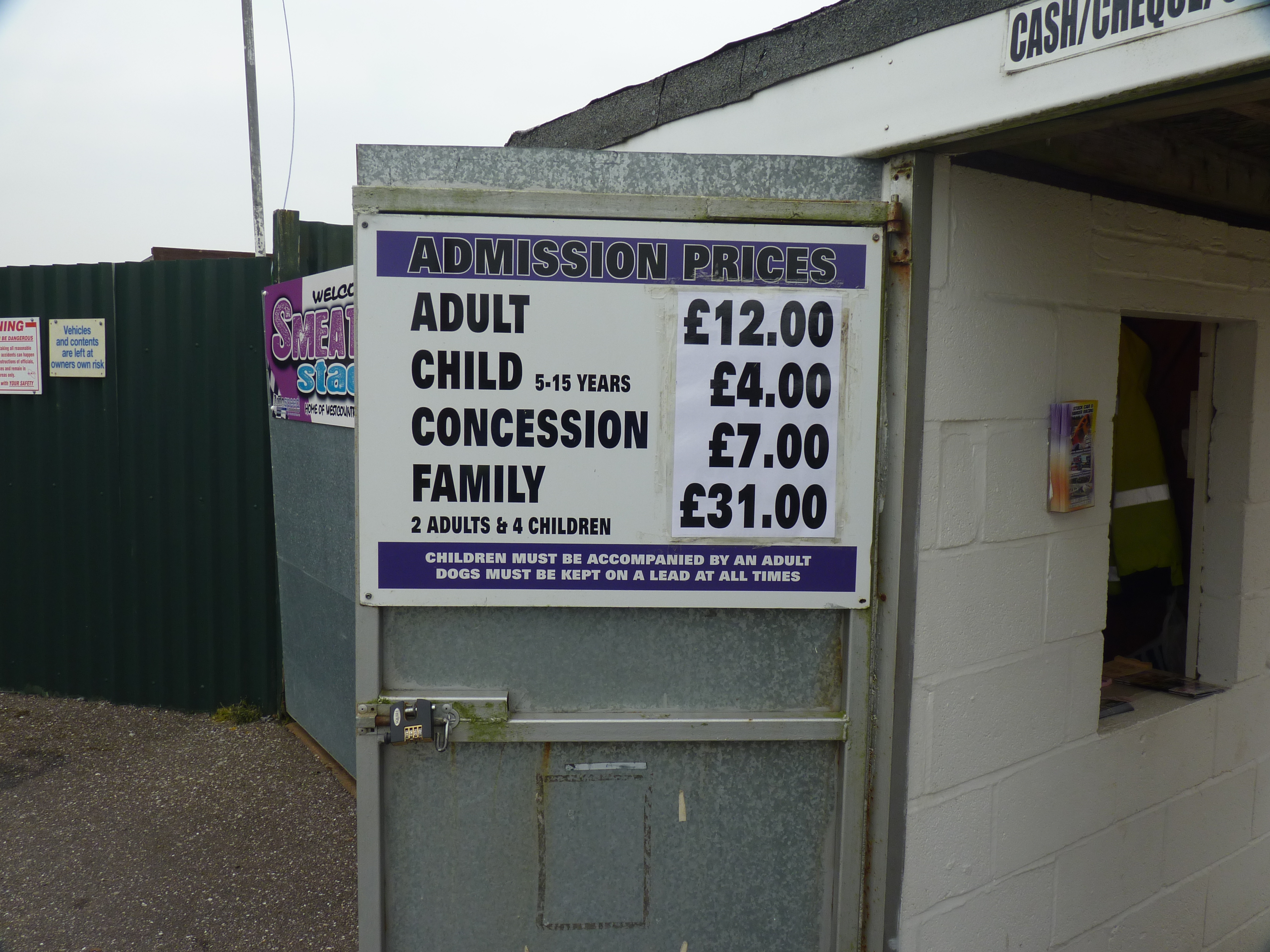 U.K. racing can be a little pricey.

Most of the UK tickets cost between 7-12 English pounds.  That’s about $10 to $20 dollars.  That’s much more expensive than regular programs in the USA. 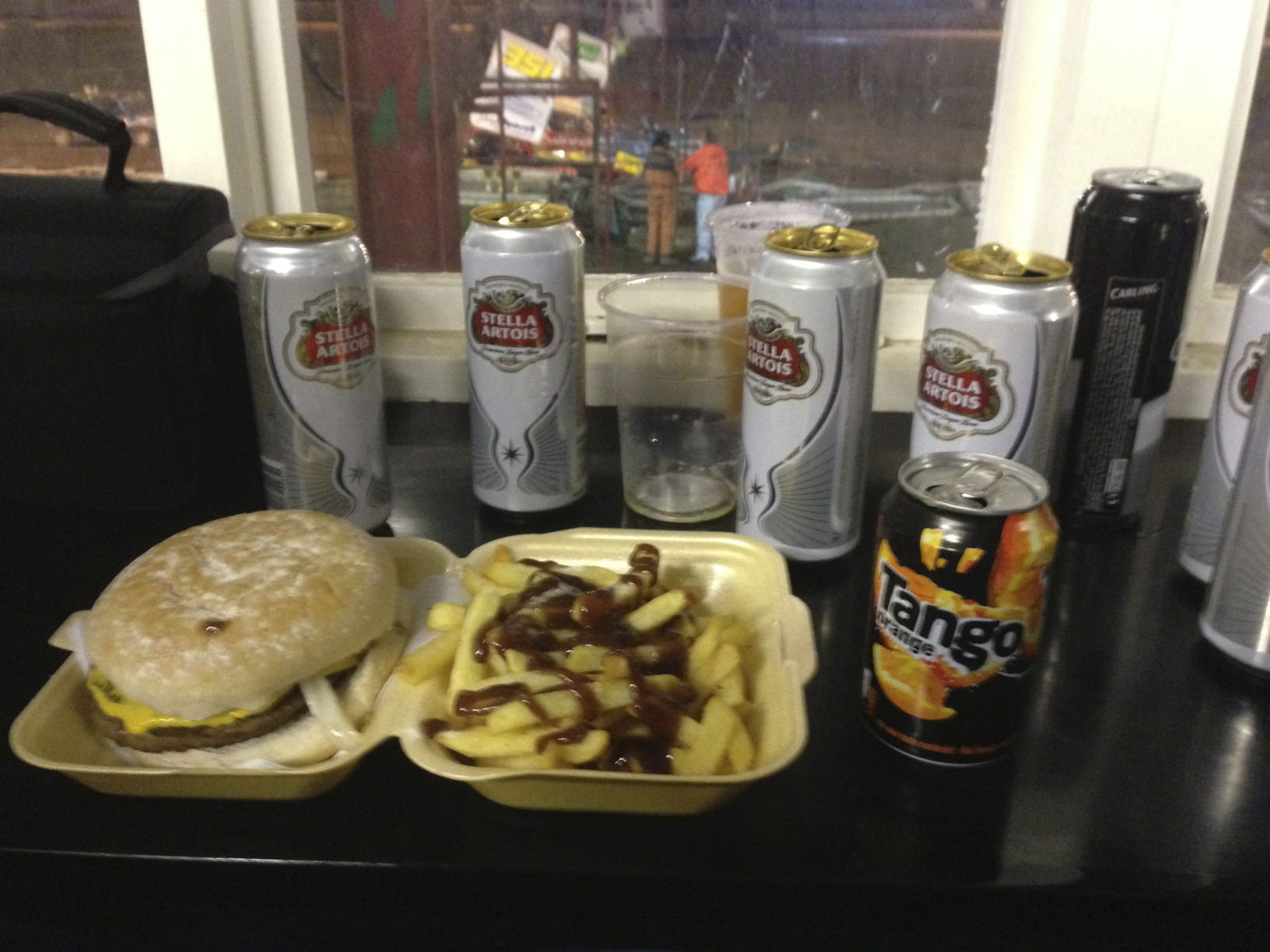 Again this is somewhat subjective.  There’s probably a bigger selection of menu items in the USA but UK tracks often have a separate bar area where alcoholic drinks are served.  I must admit that I don’t know what U.K. “hamburgers” are made from! 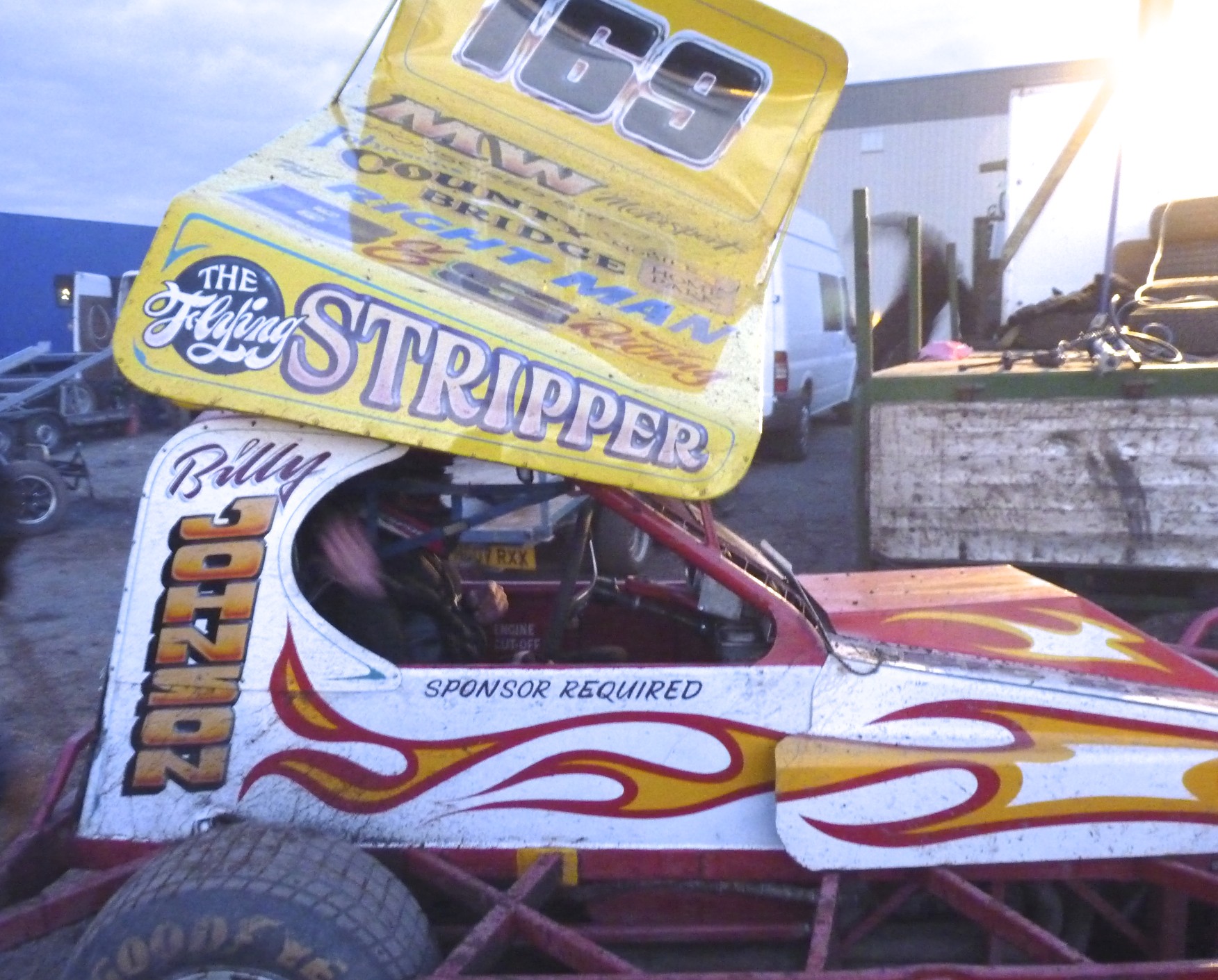 The USA has better and faster racecars.  The UK has a better quantity of cars in each formula/class. 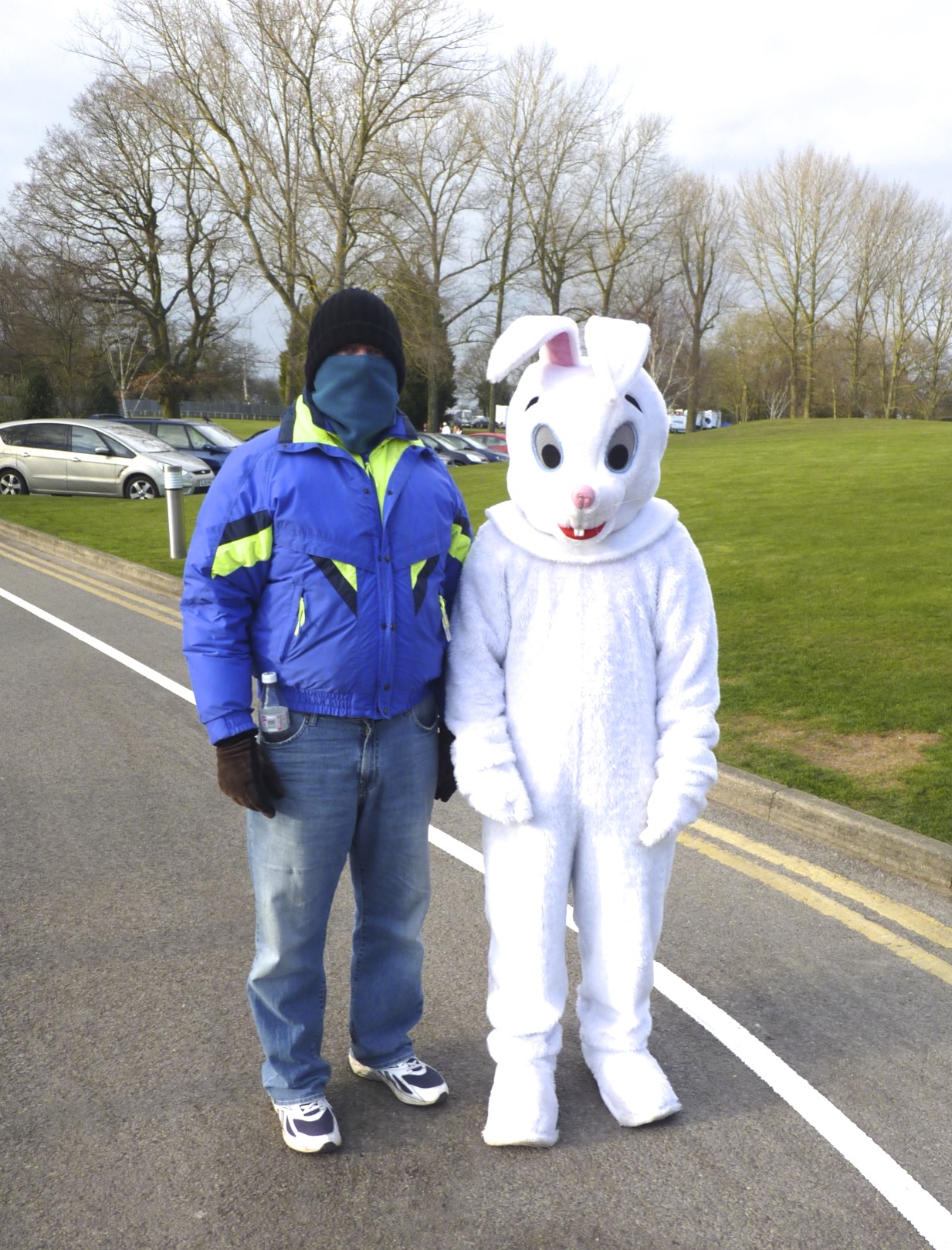 If you haven’t seen racing in both the U.K. and the U.S. What are you waiting for?

The overall winner is difficult to judge.  The UK has a lot going for it.  The racing in the USA, at a well-run track, is very good.  I leave it to you to judge how much weight you give to each of the items listed above and any others I may have omitted.

I hope this comparison has made you think about the plusses and minuses of racing in these two great countries.  It’s fun to watch races but it’s more fun to watch good races!

NASCAR – My favorite and not so favorite...