Here’s wishing everyone a Merry Christmas and the happiest of holidays. 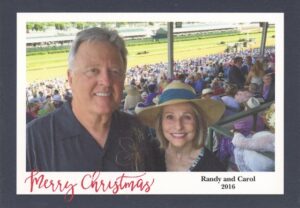 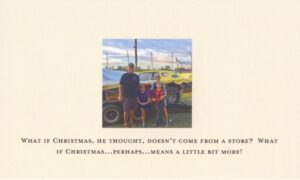 Time value of age! I’ve invented a new phrase. Don’t believe me? Google it. You won’t find this phrase anywhere. If you can’t believe what you read on the internet, then what can you believe? You all know that with the time value of money it’s better to have a dollar now than in the future, right? With time value of age, which becomes relevant in your 50s and 60s, it’s better to do stuff now rather than later. Now is now. Later is not guaranteed.

With that mantra in my head and dragging Carol along kicking and screaming, we headed off on all kinds of adventures this year as we have been doing for a long time. I hear people say, “Carol must be a saint.” What the heck does that mean? I did have to review my Google calendar to make sure I hadn’t missed anything. We stayed overnight on a yacht, went to Maui a couple of times, ran down to Cabo San Lucas, got a colonoscopy (it’s more fun the more you do it), rode Amtrak from Austin to Los Angeles with our twin grandkids, went trackchasing in Ireland, went to the Kentucky Derby for the first time (fun…crowded!), went to London at Easter for trackchasing, and from there Carol and I saw racing in Serbia (her 40th trackchasing country). I returned to Bosnia and Herzegovina for more auto racing (my 72nd trackchasing country) with my good buddy Boris Miljevic. We refinanced our mortgage (amazing what they will loan retired folks), visited Carol’s mother (age 87) in Denver a couple of times, slept overnight in my car and various airports during the trackchasing season, and went to UCLA road football games at Texas A&M and Colorado (as well as to Penn State for the Ohio State game). Also, we spent eight days in Austin with the twins (Whataburger and a Texas drive-in movie theater among the highlights), and invited a termite guy to the house. All in all, I went trackchasing in 24 states and likely nine countries. Likely? Yep. By the time you read this, Carol and I hope to have completed trackchasing in Panama, and then I’m off to Zimbabwe (yes, THAT Zimbabwe). So how have we done with the “time value of age”?

Back on the home front…as the days marched on, Carol grew fonder of “Mr. T”. No, not the TV show. But Mr. T as in the “Trumpster”. Postelection we take heart in knowing that the good Lord works in mysterious ways. May our country prosper greatly and remain safe during the coming years.

Carol continues with aerobics, yoga and keeping track of the government, a never-ending job. I’ve been power walking at the beach and expect to meet my goal of exercising aerobically for a minimum of 250 days. Carol and I eat out a lot, and she loves preparing Atkins Diet meals for me (no, she doesn’t).

Our family is doing well. Jim continues to thrive in Hawaii paying his bills with all kinds of diverse teaching, writing, and government-contract programming. Kristy and James have been exploring Texas. They are terrific and devoted parents. J.J. loves being a commercial airline pilot. He travels the world about once a month for fun.

Our twin grandbabies, Astrid and Mitch, are now eight years old and in the second grade. They start school at 7:30 a.m. each morning. When we stayed with them, we were all up by 6:30 a.m. (O.K., sometimes I slept in until the last minute) to begin a very full day. It’s fun being with grandbabies. I would give up trackchasing to take them to school every day. O.K., maybe I would let them skip school a time or two to go on a trackchasing trip.

Now as I am about to pass this letter on to the censor (Carol) for endless rewrites (drafts must be triple spaced…I write what I am allowed to write and am happy for it…she is fussy), we are thankful for our good health and our family and friends.

We wish everyone a most joyous holiday season and hope their happiness and health are as good or even better than what they post on Facebook or have described in their own Christmas letter.

During the year I stumbled across a 15-word mantra that describes wealth. It reads like this: The only true wealth is to be able to spend your time as you wish. By this measure I consider Carol and me to be zillionaires. Spending your time as you wish isn’t about doing it next summer, next year, when you retire, or at some undesignated time in the future. The time is now.

Just about everyone likes to take a vacation, right? Vacations are a routine part of our lives and not the exception. We live at the beach in San Clemente, a location that might be the best place in the world. However, as I travel the country and the world, I find that most people think where THEY live is the very best place…..and that is the way it should be.

This year I traveled nearly 200 nights away from home. About half of those nights were with my trackchasing hobby. Some folks think trackchasing is about auto racing. While partially true, for me it’s really about travel and logistics. Who wouldn’t enjoy a day or two in Oklahoma City, Orlando or Oregon? The challenge that keeps me interested is how I will get from point A to B to C. I have now seen racing at nearly 2200 locations in 70 countries. Remember the mantra. We did get hoodwinked into making six trips to Hawaii (four islands). I hate it when that happens. New York City, Washington, D.C., Las Vegas, Branson and the Sturgis motorcycle rally also made the trip list.

Carol is an admitted homebody. If I wasn’t there to cajole, caress and convince her to travel 80-100 nights a year…she might not. Then what fun would she have? The secret to a happy marriage is for each person to have his own interests beyond joint interests. Carol loves her aerobics and homemaking activities. Just last week she repaired an electrical outlet, climbed a ladder to replace a ceiling lightbulb, and vacuumed and polished the driveway. I stay out of her way. She’s like living with your own personal Angie’s List home-repair person.

Our family continues to do well. J.J. loves flying in the commercial airline business.  Kristy and James are having fun after their relocation to the Southwest. Parenting seems like a full-time job, and it is! When we were kids, we were often told, “Go out and play and be back by dark.” Today parents would be cited for child abuse with that type of direction. Jim continues to thrive in Hawaii with rocket-launch responsibilities on his list of achievements.

Our twin grandbabies, Astrid and Mitch, are now seven years old and in the first grade. To put it simply they are the best-looking and smartest grandkids in the world. Remember, I don’t really know YOUR grandkids. We cherish every minute we get with them and plan for many more.

We wish everyone the most joyous holiday season and hope their happiness and health is as good or even better than what is described in their own Christmas letter.

See ya next year.

Great letter, Randy. Thanks for taking the time to write it.

Merry Christmas to you and Carol and all of your family!

I needed a haircut…but I bought an iPad