You are here: Home » Blog » US Regions » East » Convention Hall 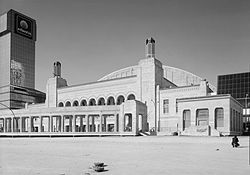 The Convention Hall in Atlantic City, New Jersey is officially listed as my 92nd-lifetime track.  I did not begin writing my famous “Trackchaser Reports” until the middle of the year 2000.  My first official Trackchaser Report was written for track #425, the State Fair Speedway in Sedalia, Missouri.  I saw that track with my brother Mark on May 28, 2000.

Therefore much of I can tell you (as limited as it is) is from memory.  Carol and I were living in the Chicago area at the time.  I can’t remember exactly how we got from the Midwest to the East Coast.  I can’t imagine that we would drive 850 miles one-way to see the event.  It’s equally difficult to imagine, at the time, that we would fly over to Atlantic City for just one racing venue.  If I had to guess we used frequent flyer miles.  However, when I think about THAT it can’t be true.  American Airlines started the first-ever airline frequent flyer program.  That program was introduced on May 1, 1981, a few months after our visit to Atlantic City. 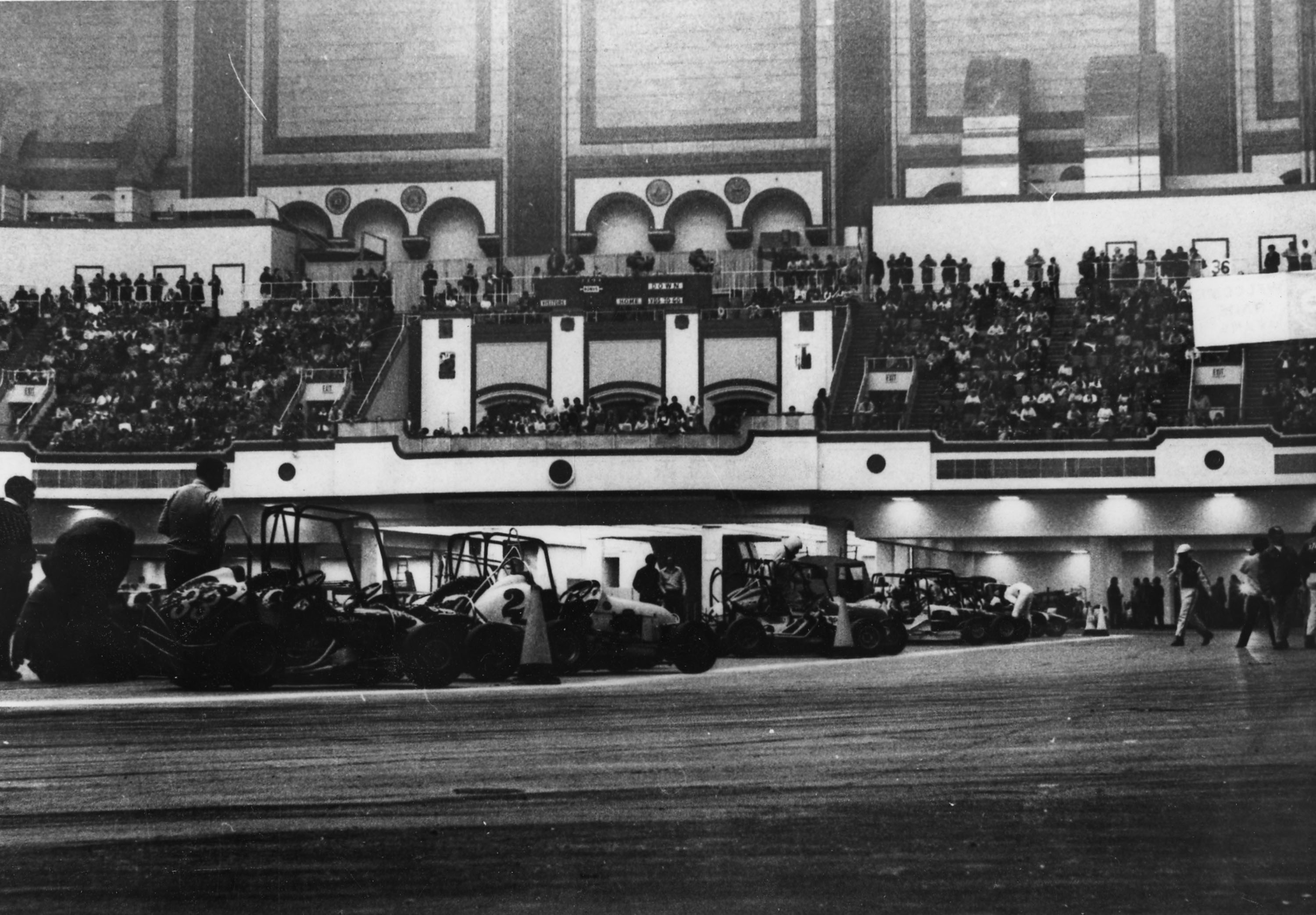 The floor of Convention Hall (1970 photo) accommodated a full
1/5 mile concrete oval plus the entire pit area through the 1981
season. All the fans found stadium seating in the balcony. Lighting on
the track was perfect and the famous Convention Hall pipe organ played
during breaks in the racing action. Today’s indoor track is about half
the original size. Source: EARHS 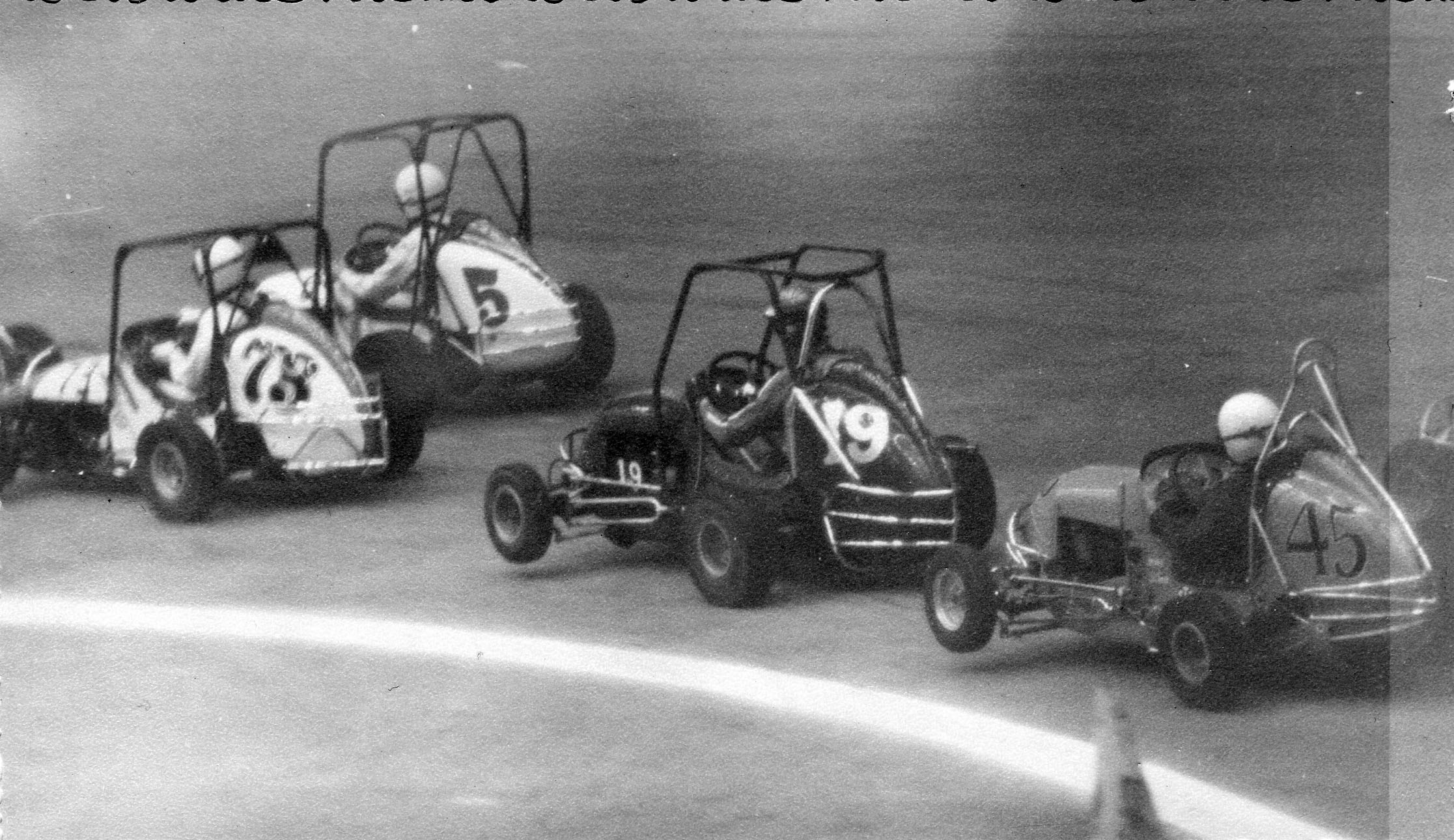 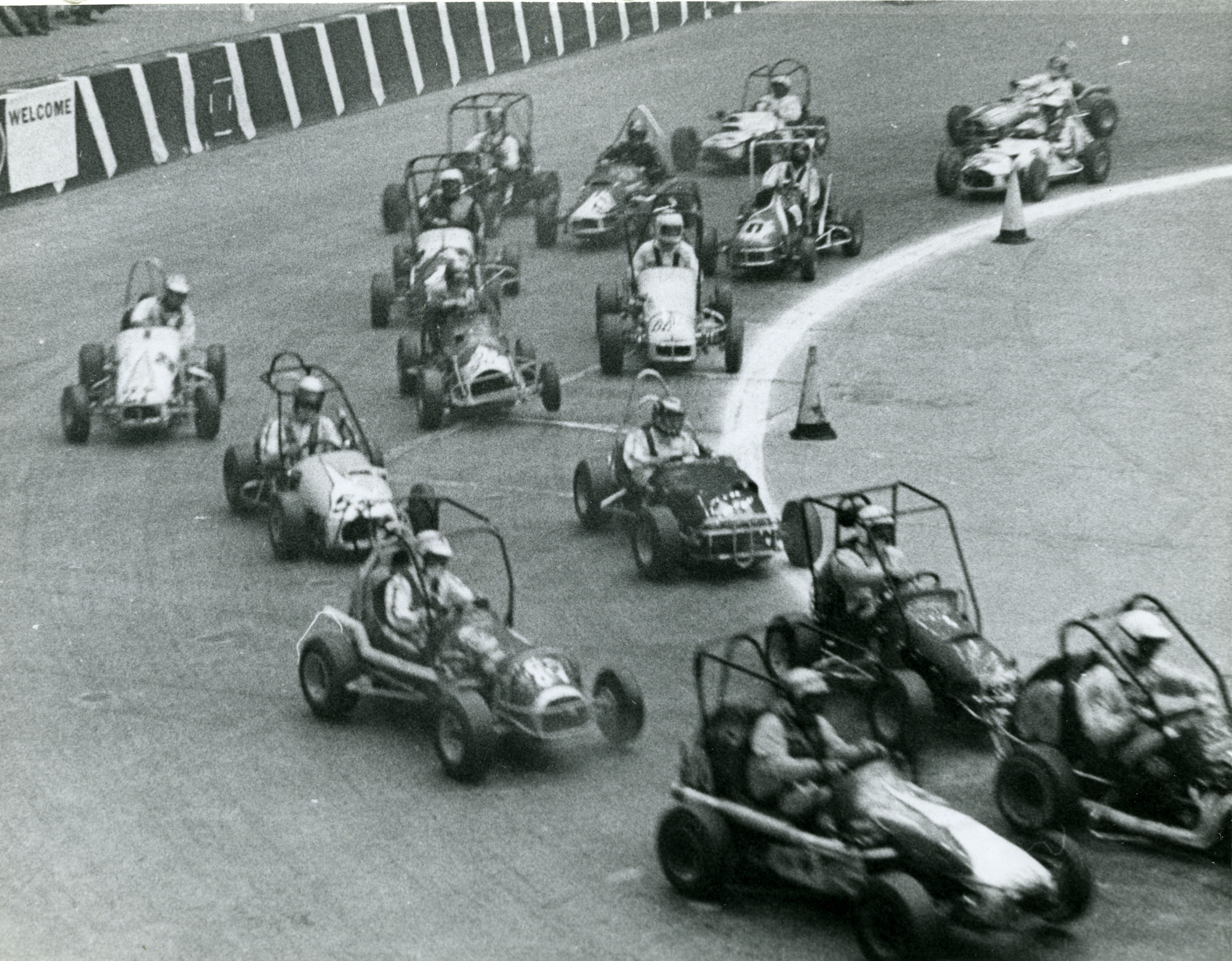 However, we did see TQ midget racing and maybe even full midgets on both January 31 and February 1, 1981.  On the first night John Jenkins #29 was the winner.  Famous east coast driver Nick Fornoro Jr #X-1 won the feature event on the second night. 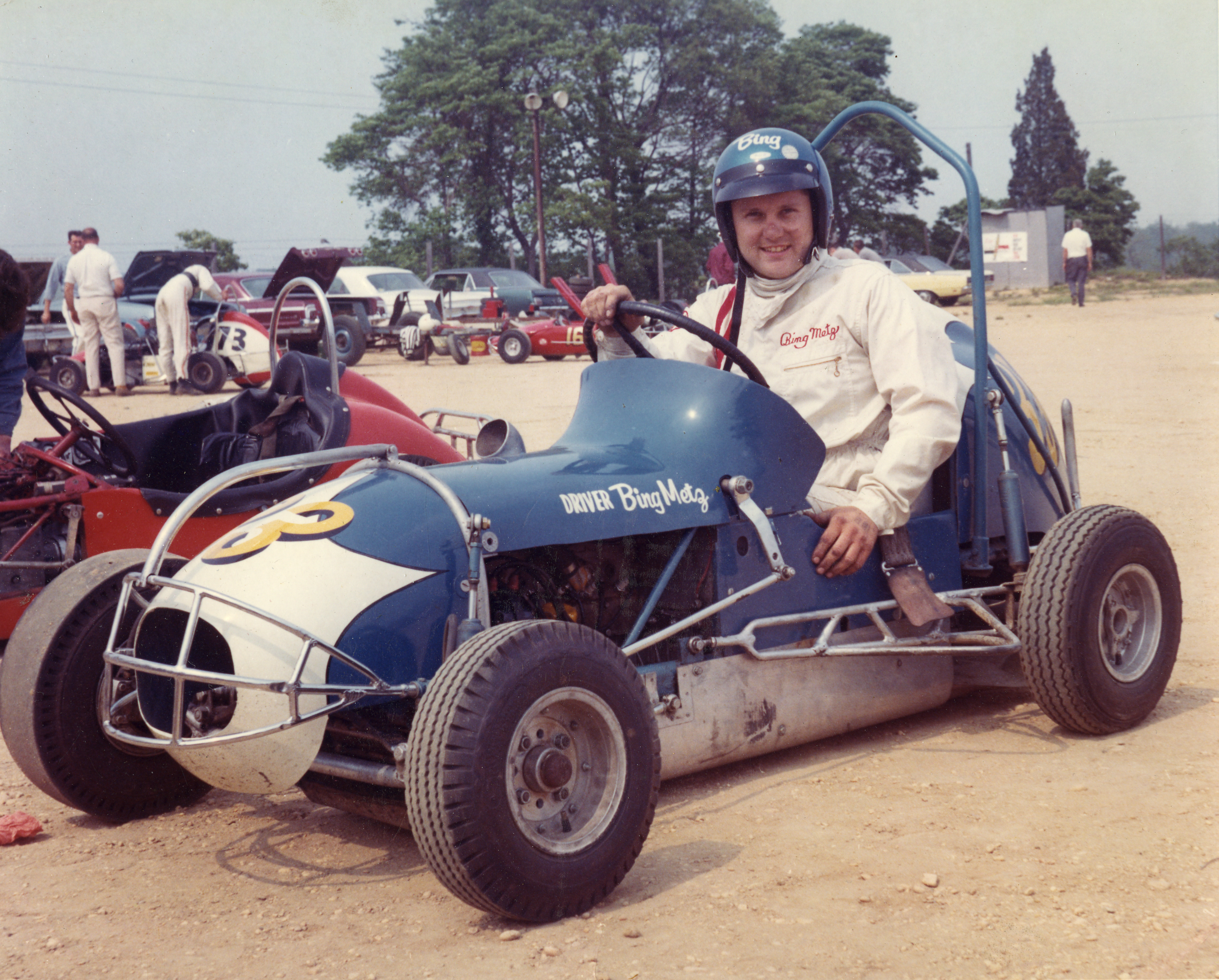 Of note is that trackchaser Bing Metz was the TQ midget winner many years ago in the Convention Hall.  I’ve met Bing a few times as he has tagged along with his trackchasing buddy Paul Weisel.  This win by Bing was one of the biggest in his career.  Bing would later make an attempt to grab the all-time trackchasing record for tracks seen in a single year (182) before settling in at 174 tracks in 2009.  Bing is listed in the “Past Trackchasing Champs” group on this site.  Today Bing spends his time trackchasing and even racing, although a recent broken leg has slowed that effort.

Special thanks to Paul Weisel and the Eastern Auto Racing Historical Society for the racing action photos from the Convention Hall during the 70s.  Check out the EARHS by clicking on this link:

EARHSAtlantic City was just getting started as a “casino town” in 1981.  The weekend we visited was extremely cold with a 30-40 M.P.H. wind blowing in off the Atlantic Ocean.  Local folks had only approved legalized gambling in 1976.  The first casino opened in 1978 less than three years before our visit.By this time I had been to Las Vegas many times.  While living in Phoenix in 1974-75 my sales territory included Las Vegas.  I would leave Phoenix on Monday once a month and spend a week in Las Vegas “working”.  Much of my work came after 5 p.m.  It was then that my fraternity brother Jim Hammer and I would go out on the town.  We pooled our gambling money.  While I counted cards at the blackjack table Jim hustled the ladies.  It was a plan that worked for both of us.  We would normally finish off our “evening” in the early morning hours at a casino coffee shop discussing all manner things.Las Vegas generally has beautiful weather although in the summer it gets hotter than hot.  Tourists flock to “Vegas” for the gambling, shows, clubs and the weather.  That’s why I couldn’t believe what was happening with Atlantic City and their move into the gambling world.  They would be in competition with Las Vegas for gosh sakes!When we visited each of the couple of casinos that had been completed was 2-3 blocks from the other.  In between each casino was solid urban blight.  It didn’t even look like it was safe to walk from one casino to the next.  If we didn’t get robbed we might be discovered frozen to death by one of the coldest winds off the ocean that I could ever imagine.  How could this situation compete with Las Vegas?  I would suggest that Atlantic City made Las Vegas even more popular with its arrival.  Atlantic City has a long list of cancelled casino plans.  I would have to say the success of gambling in Atlantic City has been muted at best.I do remember that the Convention Hall in Atlantic City was more famous for something else than auto racing.  The hall was built all the way back in 1926.  That explains it’s generally rundown condition when we visited in 1981.  The Convention Hall was most famous for hosting the Miss America pageant from the hall’s opening until 2006.  The pageant returned to the Convention Hall, now named Boardwalk Hall, in September 2013.The Convention Hall also hosted to several other mega-events including the 1964 Democratic National Convention that nominated Lyndon B. Johnson.  Major musical concerts with acts such as the Beatles, Rolling Stones, Madonna and Lady Gaga have played here.

Mike Tyson fought many of his heavyweight championship bouts here.  The 1964 Liberty Bowl was the first-ever college football bowl game played indoors.  The Convention Center definitely has a long and storied history.  Oh, and one more thing, the Convention Hall has the largest pipe organ in the world with 33,000 pipes!

The organ is currently undergoing restoration mode, although it will take years to complete. It is a slow process with only volunteer dollars. BUT – it has begun. Only the right main (right stage_ chamber is playable, and in tune at that. It was played for the public for the first time in years, at the 2013 Miss America pageant. Although that portion of the pageant didn’t make the TV prime-time show, it was heard by those in attendance, and gloriously so. Also a very important note is that there is now a full-time on-staff organist at the hall, Stephen Ball. Read at the bottom of the attached article. http://boardwalkhall.com/organs.asp

DAILY concerts are given by Dr. Ball, but using only the most-capable right main stage chamber. That chamber contains the two most well-known ranks of organ pipes: the Grand Ophicleide rank, which is listed in the guiness book of world records as the loudest organ pipes in the world, and the 64-ft diaphone/dulzian rank. The Grand Ophicleide. while very loud, is not “ear-splitting” as one might think. It can sing out over the rest of teh organ, quite clearly. The 64-foot diaphone/dulzian resonates, at it’s lowest tone.longest pipe, at 8 Hertz. That’s modern-talk for 8 beats per second.

Sadly, the great organ barely plays if it plays at all. It is in need of a restoration that I fear will not happen. The organ needs a large group of folks like the Friends Of The Wanamaker Organ in Philadelphia which volunteers its time to do the work now needed to maintain the 29,000 pipe concert organ. They were also heavily involved in the complete restoration of this amazing instrument. In other words The Friends Of The Wanamaker Organ did the vast majority if not all of the labor and Lord & Taylor and then Macy’s supplied the funding.

Actually, the organ is in the process of being restored and the Right Chamber is working now- it was featured in a pre-event concert given at the Miss America pageant in September. Still a lot of work to be done, but a grant made this portion of the restoration possible. An auditorium organist has also been named- I believe he is Stephen Hill? Tours are also being offered to help ppay for the restoration. Check the Auditorium website for particulars. http://www.atlanticcitynj.com/events/details.aspx?id=2568