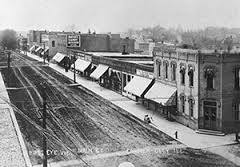 From the travels and adventures of the “World’s #1 Trackchaser”. 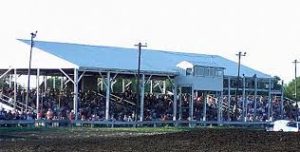 The first 71 tracks on my all-time trackchasing list were seen prior to 1980.  Back in those days I didn’t think to record the date I first went to a track.  Nevertheless, I have the Farmer City Raceway listed as my 44th lifetime track.  I’m going to guess I first went to Farmer City in the early 70s.  We were living in Peoria, Illinois in 1972 and 1973.  After that point we began to be transferred all over the country on a frequent basis.

The Farmer City Raceway can be seen from Interstate 74.  The track is just 66 miles southeast of my hometown of East Peoria, Illinois.  I must have driven past the track hundreds of times.  My only written comment from visiting the Farmer City Raceway was “The grandstand is too far from the track”.  It is!  Back when I went there the FCR was not nearly as popular as it has been in recent years after hosting several high dollar stock car shows.

According to the History of American Speedways reference book they raced at this fairgrounds in the early 1940s and then from late 1945 until today.  I had no idea the track went that far back. 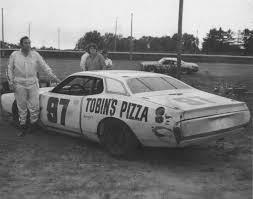 I stumbled across a very interesting article regarding the history of the Farmer City Raceway.  It was written by Jim Tobin.  It was posted on September 9, 2014 by the city of Farmer City.  Jim Tobin was the operator of Tobin’s Pizza in Bloomington, Illinois.  Jim was also a stock car driver of some note in the area.  He used to come to the Peoria Speedway back in the day sporting #74 on a huge Dodge stock car. 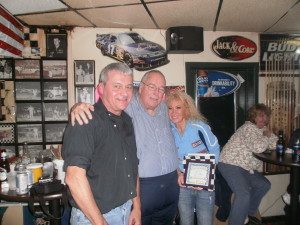 Jim (center above) passed away on January 28, 2012.  He and I had something in common.  Jim Tobin and I were inducted into the Peoria Old-timer’s Hall of Fame in December, 2011.  The above picture shows Jim accepting his award.  Sadly Jim died the next month at age 69.  I will never forget what Jim told the crowd in his acceptance speech that night.  He explained the advice he had gotten from Peoria Speedway legend Herb Shannon about getting a racer to handle well.  Jim said he was told “Just grab that steering wheel real soft like you are holding a ‘big pair of tits’ for the first time”.  Jim was a character and well-liked by all who knew him.  Here is what Jim had to say about the history of the Farmer City Raceway.

Auto racing came to Farmer City in 1938 and the local track gained immediate recognition throughout the central states. To this date, Farmer City has continued to be recognized as one of the better facilities for motorsports.

In it’s 49-year history, there have been three locations for the track, and midget auto racing has yielded to stock cars, but the tradition continues.

In 1938, the race track was not a track at all by today’s standards, but a flat “show ring”. The fair grounds had been relocated to a site southeast of the business district. Today, that fairground would be identified as being just south of Route 54 and east of Lincoln Street. The new grandstands were designed for horse shows, not auto races and the “society horse show” was a big drawing card at the annual fair. Best of all, lighting had been provided for night performances.

The powerful but tiny open-cockpit cars, spewing a castor-oil scented exhaust, brought to Farmer City each Thursday evening a contingent of daredevils who, in turn, brought fans from as far away as Chicago and St. Louis. In later years, fans of the Indianapolis 500 would recognize many of those daredevils competing in “the greatest spectacle in racing”. Tony Bettenhausen, Bob Muhlke, Henry Banks, Rex Easton and Don Branson were among a long list of drivers who moved from the local oval to the Brickyard.

World War II brought racing everywhere to a halt from 1942 through 1945. Servicemen from Farmer City wrote letter from all corners of the globe reporting that whenever the name of their hometown was mentioned, some servicemen was sure to respond “Oh, yes, that’s where they have the midget races,” and often, “I’ve gone to your racetrack many times.”

Midget auto racing resumed on Decoration (Memorial) Day in 1946. The fairgrounds had been relocated to its present location on acreage leased from the Stensel family along Route 150 at the north edge of Farmer City.

Art Zuiker of Chicago was the track manager, and Farmer City was the Thursday night stop on a racing circuit which included Soldier’s Field in Chicago. A plethora of big-name drivers at this time included Mike O’ Halloran, sponsored by the Leader Card Company. The Chicago-based playing card manufacturer would, in years to come, be recognized as a major sponsor in motorsports. It was this type of sponsorship which led to the development of the once revolutionary Offenhauser engine, and the technology of racing had entered the world of the future.

By 1949, midget auto racing had built itself into such an expensive sport that top cars became scarce, at a time when new race tracks were sprouting up to compete for drivers and fans. The Farmer City Fair Association tried to counter the trend by joining the Triple A sanctioning body, then represented by Bill Vanderwater, Chicago, a nationally known figure in racing.

But Triple A was having its problems, too, and midget auto racing was in a definite decline outside of major urban areas.

The track announcer at the midget races had been Port de Fraties of Springfield, and by midsummer he had left Triple A to form his own sanctioning body. Through de Fraties, an entirely new kind of auto racing was born in central Illinois; stock car races.

“See’em Flip, See’em Flop,” was the advertising slogan when stock cars – then called hard tops – came to the Farmer City Speedway August 19, 1949. Cars were to be any model, strictly suitable for street driving, vintage 1937-1949. One specialty event would be the handicap race, consisting of three laps forward, plus the final lap in reverse. Australian pursuit races and team races were also on the program, and the stock cars were started from a standing start. Admission was $1, and a new era was born.

A postponement resulted in the inaugural race actually being held ten days after the original date. This time, the advertising modestly claimed, “The biggest thrill of your life will come to you Monday, August 29.”

The de Fraties circuit of Farmer City, Mazon, Macon, Lincoln, and Peoria was an instant success, and 1950 established the early stars of stock car racing, and rendered the midget autos as nothing more than nostalgia. 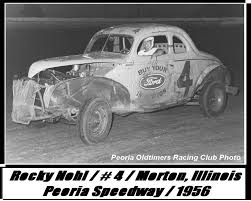 An early hero was Les Snow of Bloomington, who later rose to prominence as a talented USAC driver. A racing crash ended his career prematurely, but not before Snow became a legend in Illinois. Rocky Nohl of Morton, Jim Landers of Lincoln, and Chuck Jost and Rosy Roseman of Clinton were among the top contenders, but no one captured the fans like Les “Tiger” Snow. The “Tiger” nickname was bestowed on him by Port de Fraties, actually in reference to Snow’s trademark of covering his car top with a leopard skin pattern. That leopards and tigers are barely kissing cousins didn’t phase de Fraties, and bothered the fans not at all.

A strong contingent of novice driver’s originated in Farmer City. There would be no way to name all, or even most fo them but Virgil Ester and Ed Owens come to mind among those having longer stints in racing. Loil “Ace” Williams might have been the most popular, and was without doubt the most colorful. At least five cars were sponsored by the John Isaacs Used Car firm, and the Isaacs transport made quite an impression when it pulled into an area race tract with its load of cars.

The cars of the ‘50’s didn’t cost much, and winners weren’t paid much. If a driver didn’t show up, any fan could take over the steering wheel…everyone was an amateur, for the first couple of years.

Then professionalism began to be seen, and only the Snows, Landers, Rosemans, etc. could afford to maintain competitive cars, now called “stock cars” but a lot less stock than they started out to be.

In the late ‘50’s there was another lull in the cycle of racing, as the stock cars waned in popularity. Go-kart racing took over the local track and enjoyed a momentary success. In the meantime, there was motorcycle racing every year during the fair, and for other special events.

A new banked quarter-mile track had been built inside a half mile flat track, and Farmer City was a focal point for horse racing and motorcycle racing. A memorable experiment came with trying the stock cars on the half-mile track Memorial Day, 1950. Billed as the “Little Indy,” the promoters attempted to start eleven rows, three abreast… a 33-car field. When the cars passed the grandstand on the parade lap, a cloud of dust equal to those in Oklahoma in 1929 engulfed the spectators. As the field of cars approached the starting line, the same cloud of dust blinded the leaders. A 33-car pileup ensued, knocking at least 12 out of the race, before it ever began.

Stock cars kept getting better, and more expensive. A sanctioning body called NASCAR was bringing stock cars to national prominence and building super speedways in the southeastern states. Another group, USAC, broadened its scope from the popular “Indy” cars and midgets to include a stock car division. By 1965, stock car racing was the fastest growing spectator sport in America. Farmer City was a forerunner of things to come!

In 1972, the quarter-mile oval was rebuilt by a construction company engaged in building Interstate Route 74, and lap speeds increased dramatically.

After the Junior Smith years at the track, Dick Zeigler of Farmer City successfully operated the Raceway for three years, but resigned to concentrate on other business interests.

Track management was turned over to Bill McLaughlin and Lonnie Franklin as members of the Farmer City Fair Board in 1983. Their tenure has been a record for upgrading the physical facilities while bringing a new degree of professionalism to racing at Farmer City.

A hobby class was started, then mini-stocks were introduced, and later replaced by a claiming class of modified cars, always in an effort to have one affordable division. These classes provided competitive racing, although not so sophisticated or expensive as the highly regarded super stock division.

Through all of the transition periods, fans continued to seek out the Farmer City Raceway on Friday nights.

Promoters have come and gone, drivers have risen to fame and faded into the past and loyal fans have yielded their grandstand seats to children and grandchildren, but Farmer City Raceway is as respected today as in 1938.

Attracting big fields of cars and fielding feature events where every car in the starting grid is capable of winning has been the Raceway trademark.

You might have remembrances about the Farmer City Raceway.  If so, please feel free to share in the comments section below.  If you have any photos from back in the day, send them to me at Ranlay@yahoo.com.  I’ll try to include them here.