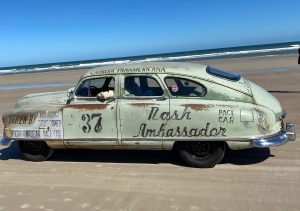 I first learned of the Historic North Turn Beach Parade from Chocolate Myers on his SiriusXM satellite radio show. Chocolate (former gasman for Dale Earnhardt Sr.) is my favorite personality on the NASCAR channel on Sirius. It just turned out I would be in Florida during 2020 Speedweeks. I was going to the Sunshine State to see some dirt late model racing at East Bay and to trackchase at the Florida State Fairgrounds. 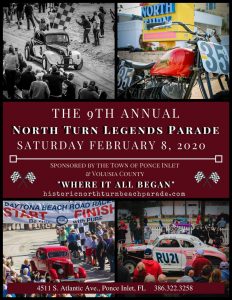 I will tell you this. I had the best time at the Historic North Turn Beach Parade extravaganza. The first half of my visit was spent simply inspecting the cars that were on display. I’m guessing there were fifty or more. 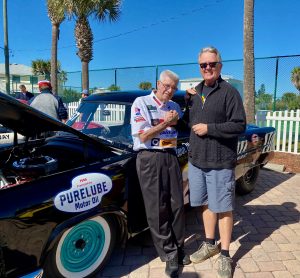 The true highlight for me was meeting Mr. Leonard Wood of the famous Wood Brothers Racing Team. Leonard Wood is now 85 years old. The last half of my visit was spent at the beach. The cars take a lap around the old 4.1-mile Daytona beach road course. A nice crowd showed up to see the festivities. If you’re down in Daytona for the races in February I’d recommend you do your best to check this event out. 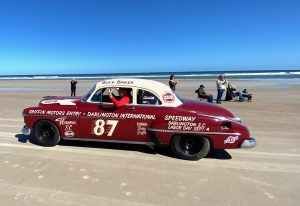 This information comes from the Historic North Turn Beach Parade website. The event in 2020 was the ninth annual display and parade. Special thanks to Chocolate Myers for turning me on to this event.

The Parade is a cooperative effort with the County of Volusia, The Town of Ponce Inlet and Racing’s North Turn. The first Parade was held on February 18, 2012 to honor the years of NASCAR’s historic beach racing day. The races were held on the sands of Ponce Inlet beach at the North Turn and the South Turn from 1948 – 1958. We hold a vintage race car parade each February on the Saturday, one week prior to the Daytona 500.

Perfection Is in the Details

It is our goal to keep the parade within the same era as the original races. To enter your race car in the parade it must be built between 1936 and 1958. The car must be an original or replica with a number on it. for entry information email Northturnbeachparade@gmail.com 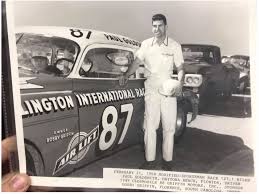 Paul Goldsmith (above), who won the last race held on the beach/road course layout in Ponce Inlet in 1958 plans to return and will be driving the very same car he drove to a fifth-place finish in the Modified-Sportsman race the day before his new car (now called “Cup”) victory the following day.

He is the only driver to win on the beach in a race car and also ride a motorcycle to victory on the same course. 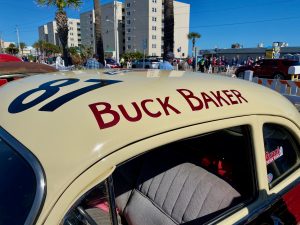 Other name drivers who drove the car are Lee Petty, Buck Baker and Darel Dieringer. Goldsmith is expected to be joined by 69 others in this marquee event, which includes six others who competed on the beach in the 50’s. Those drivers include NASCAR Hall of Famer Rex White, former Grand National drivers Johnny Allen, Dink Widenhouse, Brownie King, Tiger Tom Pistone and possibly Dick Passwater. Former Grand National driver Blackie Wangerin has brought his race car, a 1940 Buick, out of mothballs and will make the 4.1-mile trip on the sand and S Atlantic Ave. Another former Grand National driver, Travis Tiller is also expected. 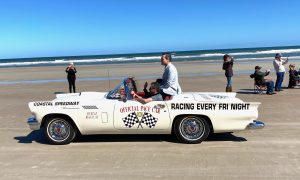 The Grand Marshall for the parade is U. S. Congressman Michael Waltz and the starter will be Volusia County Council woman, Billie Wheeler. Patrick Gavin, administrative assistant to U. S. Congressman Bill Posey will drive the pace car. NASCAR executive Mike Helton will drive a tribute 1953 Oldsmobile that was driven to victory in the 1953 racing event by Bill Blair. Daytona International Speedway executive Chip Wile will drive a tribute 1950 Oldsmobile that was the first car entered in the 1950 Southern 500, run at Darlington Raceway and is owned by Marshall Griffin. Bud Layton, has entered the actual former moonshine car, a 1939 Ford that Gober Sosebee drove to victory in 1950.

Two years ago, the parade drew an estimated 15,000 spectators and with the increase in the number of entries, the crowd could top the 18,000 mark. 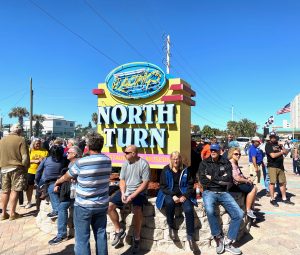 The parade is scheduled to start at 12:30 p.m. but may begin at noon due to the number of participants. The cars will be on display at 9 a.m. in the parking lot across the street from the Racing’s North Turn Restaurant, located at 4511 South Atlantic Avenue.

At 2 p.m. former Dale Earnhardt gasman and Sirius Radio host Chocolate Myers will interview many legends racing drivers and personnel. Spectator parking is at 4200 South Atlantic Ave in Wilbur By The Sea and there will be free shuttle service from there to the South Turn starting at 10 a.m. that will run continuously until 5 p.m.

The first part of this photo album shows the cars at the Historic North Turn Beach Parade on display. The last half of the photo album lets you see the cars actually driving on the beach in Ponce Inlet, a suburb if you will of Daytona Beach. 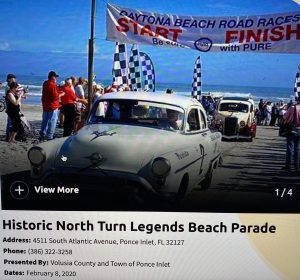 If you ever get the chance I highly recommend you go see the Historic North Turn Legends Beach Parade in Ponce Inlet (Daytona Beach). Florida. Until you get that chance you might like to view the video of my visit. On the other hand, if you watch my video you might spoil the surprise of your very own visit. It’s your call!