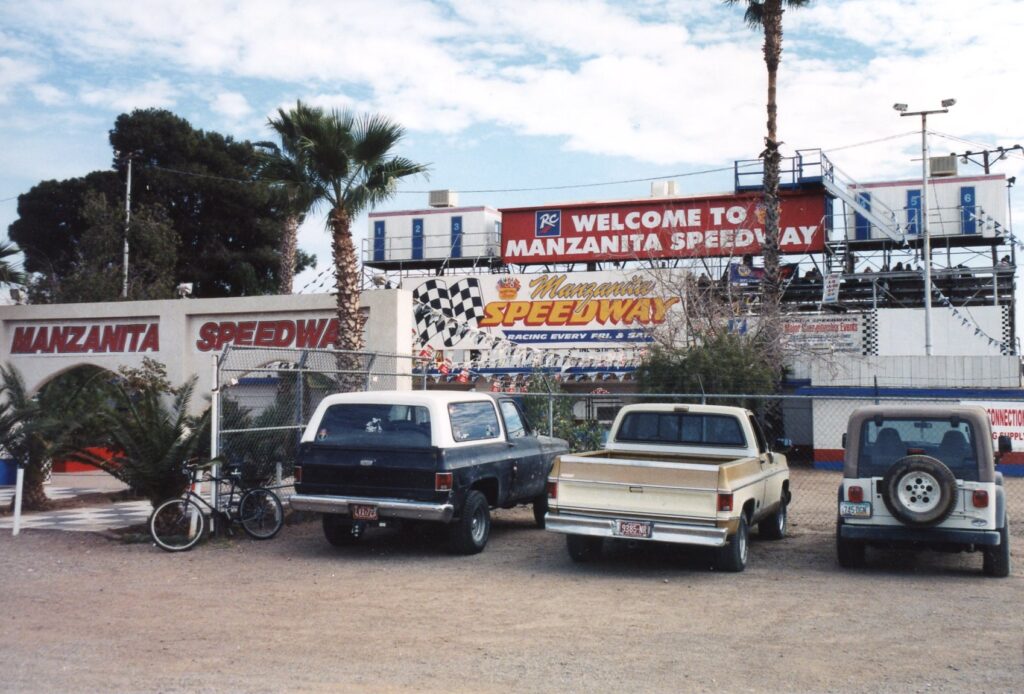 The Manzanita Speedway was once my “home” track.  From mid-1974 to mid-1975 Carol and I lived in Phoenix, Arizona.  As a matter of fact, our oldest son J.J. was born in Arizona.

“Back in the day” when a corporate relocation was offered you either accepted the job on the spot or you thought about it over the weekend.  Then you called your boss with your answer.  If the answer was “Yes” then you took your spouse out for a weekend of house hunting.  You picked out your house during the 2-3 day house hunting trip.  Then, in my case, I started working in the new place almost immediately.  The company would swoop in and buy our old house and put all of our stuff in a moving fan.  The complete process was usually wrapped up in 30 days or less.

Don’t believe it?  We moved to Phoenix on less than 30 days notice in August of 1974.  Carol was seven months pregnant at the time.  The average August high temperature in Phoenix is 105!  At the time Carol was driving a 1972 Ford Mustang Fastback WITHOUT air-conditioning.  It was AUGUST in Phoenix.  Just two months later our first child was born.  That’s how we did it back in the day!

I fancy myself a pretty good negotiator.  However, back in 1974 at the tender age of twenty-five I had a lot to learn.  We had looked at houses in the Phoenix heat until we couldn’t look any more.  Then I stumbled across a home that looked like it had “our name on it”.  I called the owner to make an appointment to see this vacant house.

When we pulled up in front of the house the owner was laying prone on the front lawn with a piece of straw dangling from his mouth in full cowboy gear including cowboy hat and cowboy boots.  By the way, everybody who lives in Phoenix on a one-acre lot of more calls their place a “ranch”.The house had been vacant for two months when the last folks moved out and the new buyer couldn’t close the deal.  This was 1974.  The home, situated on a cul de sac (we would call that a dead end in the Midwest) had 1,700 square feet, all of the inside upscale amenities that anyone would want as well as a huge pie-shaped backyard with a full-sized in ground swimming pool.  Remember we were moving from a two-bedroom apartment in Fairfield, Ohio (where a few years later a woman would be beheaded – Google it).The asking price was just $40,000 U.S.  Obviously, with the house being vacant the seller needed to sell.  This house was much better than anything else we had seen.  We looked at it and told the seller we would get back to him.  We weren’t four exits down the freeway before Carol and I both looked at each other and agreed this was the house for us.  I took the next exit, found a pay phone to call the seller and told him we would “take it”.  The transaction wasn’t much different than ordering a washer/dryer from Sears.  Since that time I have learned to “squeeze blood from a turnip” if needed.  Nevertheless, this was a pretty good set-up for a twenty-five year old even if I did pay full price.

I didn’t just begin my interest in racing just when we got to Phoenix.  Our company was doubling it’s sales force.  As part of that expansion I was offered a job in Salt Lake City.  I asked my boss if there were any other cities where I might be able to go.  He asked me “What’s wrong with Salt Lake City?”  I told him, “They don’t have much racing”.  He wasn’t into racing but agreed to help me find another city.  That turned out to be Phoenix.

Phoenix had a LOT of racing and much of it was done at the Manzanita Speedway.  They had racing on both a large 1/2-mile dirt oval and a smaller 1/3-mile oval.  I also saw racing on the Manzanita figure 8 track.  The ovals were added to my trackchasing list as “Pre-1980” tracks that were really seen in 1974.  The figure 8 track wasn’t added to my list until the end of 2001 some 27 years after I first saw racing there.

Why did it take so long?  Figure 8 tracks were not considered “countable” until Allan Brown proposed a rule that they should be.  The trackchasing group voted to approve figure 8 race tracks as a countable track configuration.  Then someone asked whether or not they could count the figure 8 tracks they had already seen before the new rule was passed.  That had not been addressed in Allan’s proposal.  Commissioner Will White asked Allan if he meant for his figure 8 trackchasing proposal to be retroactive.  “Retroactive” meant a chaser could go back in time and count tracks they had seen when those figure 8 tracks were not legal.  Allan thought about it for a moment and said, “Yes” he had meant for his figure 8 proposal to be retroactive.  Who benefited the most from this retroactivity?  Allan Brown.  Allan added about 40 tracks to his lifetime total with the stroke of a pen.  I added ten tracks to my total with this new rule. I can’t blame Allan too much for this.  It was Will White who asked him the question.  What was Allan going to say?  Well, I guess he could have said no.  Nevertheless, we will never know for sure how the trackchasing group at the time would have voted on retroactivity if given the chance. 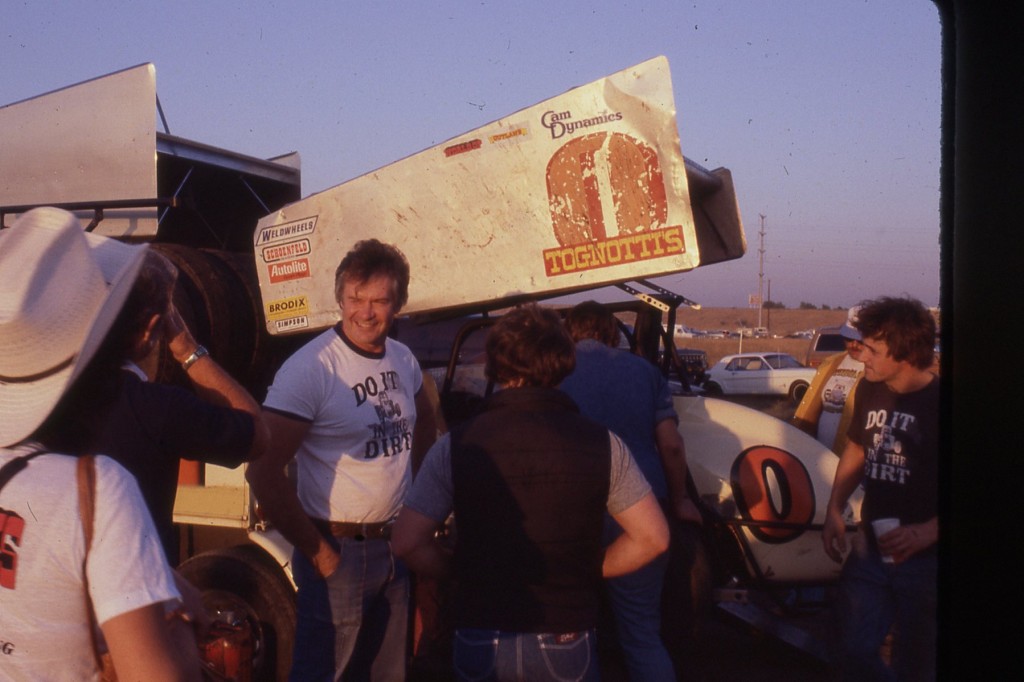 Manzanita was a very competitive track in a somewhat bad part of Phoenix.  The track backed up to a junkyard.  It was here that I first became a fan of Rick Ferkel, the “Ohio Traveler”.  Manzanita also exposed me to the Shumans, Ron and Billy.  Another favorite was Lealand McSpadden.  I once flew on an airplane bound for St. Louis from Indianapolis with Lealand.  What a nice guy.  While laying over in St. Louis I bought him a piece of cherry pie.  This was a lifetime racing highlight. 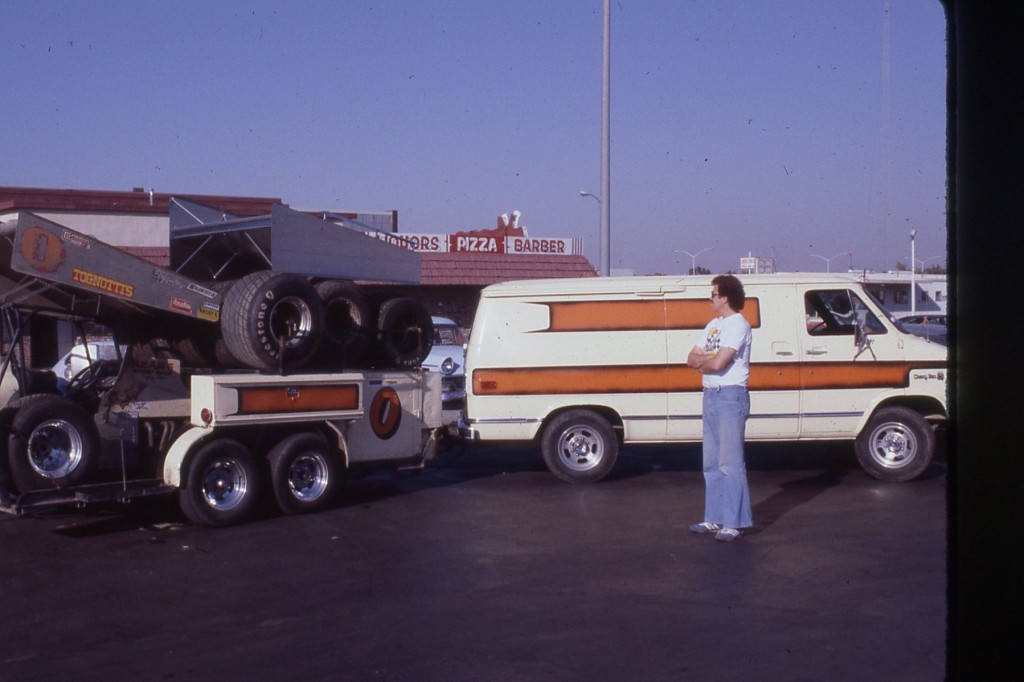 Getting a good look at my favorite sprint car driver of all time.

Sadly, Manzanita Speedway is no more.  The track was sold to a rigging company in 2009.  The last race held at “Manzy” was on April 11, 2009.  That was a major bummer.  I loved eating “cheese crisps” at the track in the early 70s when everybody else thought Taco Bell served Mexican food.

I returned there several times.  My last visit was in 2003.

Wikipedia helped me out with some background on Manzanita Speedway:

In 1965, Keith Hall purchased the facility and renamed it Manzanita Speedway. In 1968, he founded the Western States Championships at the track, offering an at-the-time generous $10,000 purse. This race became part of the triple crown of  sprint car racing.


Hall sold the track in 1984, but soon repossessed it when the new owners defaulted on the loan. In 2004, Joe and Millie Kimbro took over ownership of the facility.

In 2007, the Kimbros sold the track to the Martin family, well known in the sprint car ranks. The ownership change became effective August 15, 2007.

The track hosted over 500 racers each year during 75 to 80 nights of racing. The track featured USAC and CRA sprint car to bombers.

You might have remembrances about the Manzanita Speedway.  If so, please feel free to share in the comments section below.  If you have any photos from back in the day, send them to me at Ranlay@yahoo.com.  I’ll try to include them here.