As with many (or at least some) of my racing trips the primary purpose of the outing was not trackchasing. The MAIN purpose of this trip was to see nephew, Scott Forbes, graduate with his Masters degree in Biology from Northern Arizona University in Flagstaff, Arizona. But, being an opportunist, I was able to “catch a track” between graduation activities. 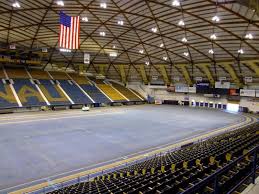 The drive to Flagstaff from San Clemente was 504 miles. This was my first trackchasing event of the season that did not involve an airplane. Flagstaff is located at about a 7,000-foot elevation. Its tall pine trees remind me of the Northwest. Another unique feature of the campus is their football/basketball complex. It’s all indoors! The building that houses these sports is the largest wood spanned building in North America. 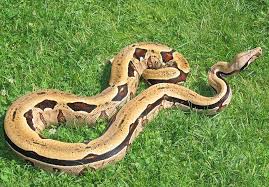 Relatives from New Mexico and Wyoming joined in the celebration. Most of these folks are “outdoor” people. They are very comfortable with the rugged climates and animals that are native to the area. I’m the only relative who is more “citified”. Citified is rural far west code for “Tenderfoot”. This became evident during one of the evening social sessions. When it came time to pass around “Manny” the pet boa constrictor everyone seemed to take pleasure in this activity. Being the “LA guy” I was less comfortable with and up close and personal encounter with Manny. Nevertheless, Carol and I had a fine time with Scott and his girlfriend, Leeann. The pico de gallo and strawberry filled French toast was in the “best ever” category. Scott, congratulations and good luck with your first assignment in Alaska.

temps in the low 60s. This made for a wind chill somewhere in the high 40s. This has been

typical of the racing weather I’ve seen all year. I’m getting tired of visiting climates that have

these four seasons: 1) nearly winter, 2) winter, 3) still winter and 4) road construction. This is

moderately better than the two climates known to Chicago……1) winter and 2) the Fourth of July.

else I travel in the continental U.S. Road signs warned motorists to “Watch for Elk”. They even

had portable electric type signs that flashed “Watch for Elk” messages. I watched for ‘em but

blankets, jewelry, pottery and moccasins. On the way I drove through Holcomb, Arizona where

the Wigwam Motel is located. The place has been there for a while. Each individual room is its

own concrete floored Indian wigwam also known as a teepee. If I didn’t already have a room for the

night I would have stayed here. 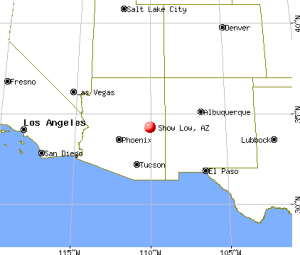 Show Low, Arizona is at a 6,331-foot elevation. In most places in the U.S. the town city limit sign

advertises the population. In the rural far west they mention the elevation. I ate at the

The Thunder Raceway is my 560th different track to attend. I am the first ranked (top 20) trackchaser to see a race at this facility that opened in 1995. Rick Schneider of Long Island, New York is the #1 trackchaser in the world with 926 tracks, but he has never even seem a race in Arizona. I wonder how many tracks that run on a weekly basis in the U.S. have never been visited by a ranked trackchaser?

General admission to the Thunder Raceway was $10. I was greeted with a sign that said, “No video cameras”. I complied with their rule. The track is a one quarter mile dirt oval. The backstretch slopes downward slightly from turn two to turn three. Cars are pitted outside the track off of turn four. 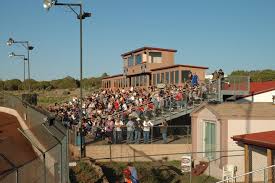 The grandstands are about 15 rows of aluminum grandstands. They also have some modern wooden V.I.P. suites and officials’ towers. Just beyond turns one and two is an area of picnic tables and trees for patrons to use. On a normal warm Arizona day this would be fine. Tonight that wasn’t a very popular spot with the winds blowing more than 20 m.p.h. Fortunately, for my long term lung health the wind blew the dirt directly away from the spectators. 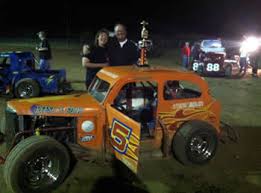 The program featured four classes: IMCA modifieds (10), dwarf cars (19), late models (6) and Mini Stocks (12). The dwarf cars put on the best show. The program was scheduled to begin at 7:30 p.m. and actually did get underway about 7:45 p.m. Listening to the behind the scenes activity on my race scanner told me that the officials were freezing their butts off as well. They did their best to keep the program moving. After watching two trophy dashes I bolted to catch the races at Manzanita………just kidding! I did watch the heats and two features and decided I’d hit the road as the temp were now in the 50s with extremely strong winds.

TRACK FOOD: The most expensive item on the menu was “Buck’s BBQ and side” for $4. Pickles were the most economical entrée at just 50 cents. I did have a very good hot chocolate for $1.50

RENTAL CAR UPDATE: No rental car for this trip as the RANLAY Lexus handled the driving chores flawlessly. It’s the best car I’ve ever owned.

TRACK RADIO FREQUENCY: The track frequency at Thunder Raceway is 464.875.