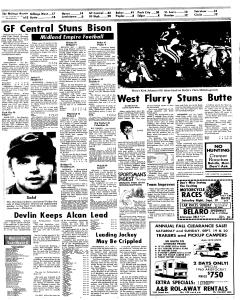 The Belaro Speedway is officially listed as my 14th lifetime racetrack to see.  Belaro was part of my “group of 71”.  What does that mean.  Prior to 1980 I did not record official dates of my track visits.  Therefore, for those 71 tracks, I have to rely upon my memory of my trip to the track. 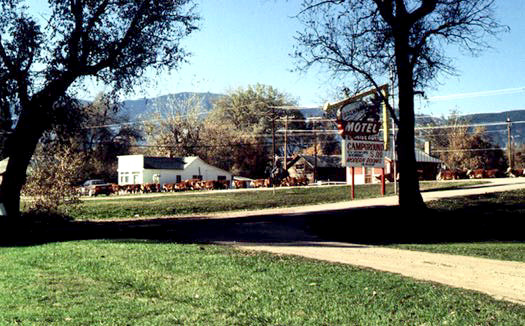 My wife, Carol, and I both graduated from Northern Illinois University in 1971.  NIU is located in DeKalb, Illinois about an hour west of Chicago.  Following Carol’s high school graduation from a Chicago area suburb her family moved to the small Wyoming town of Dayton.  Each summer during her college years Carol would return to Wyoming to help her parents and siblings manage the family business called Foothills Motel and Campground.

During those same summers I was working in the factories of the Caterpillar Tractor Company in East Peoria and Morton, Illinois.  At the end of those summers (1969, 1970, 1971) I would drive out to Wyoming to see Carol.  One summer I splurged, and for the first time ever flew on an airplane to Billings, Montana.  I guess my love affair with flying (as a passenger) began on that trip.The Foothills Motel and Campground is located (even today!) just a few miles south of the Montana/Wyoming border.  We stopped there about five years ago and the owners told us their most famous guest is Peter Fonda.  Fonda passes through the area on his way to the Sturgis motorcycle rally each year.The Belaro Speedway was just a short drive up the road from Dayton, about 120 miles.  I drove up there one night in about 1970 to see the racing on their dirt track.  Just about the only thing I remember from that track was that they had four racing divisions and four cars in each division.  I had never seen such small car counts.  However, I would come to learn that the majority of Far West located tracks would struggle to get race cars.  This is likely due to two things.  First, there is not much of a racing “heritage” in these parts compared to the South, Midwest and East.  Secondly, there isn’t a whole lot of population in these areas.Records I’ve seen show this track running as late as 1985.  Since I didn’t have a camera at the time I have no personal photos from this track.

I came across this website, doing a search for Belaro Speedway as I was a young attendee in and around 1977. At the time my family had a thing for racing and so did I. As I recall, I believe that my dad might had tried to run Belaro, but all is a little fuzzy since I was probably 12 at the time.
The track ran modifieds and flattrack dirt bikes. The driver who always stuck in my mind was the one who drove the #57 coors light sponsor camaro. Not really sure of his name but I think it was Eddie Barger. I could be wrong. I really enjoyed the racing and the time that I spent with my father back then. One day I wanted to return but life took me to the southern eastern United States and never got back out west.

Hi Rob, Thanks for sharing your history with the Belaro Speedway. The southeast is a long way from Montana. It’s time for you to come back if just for a visit. Take good care, Randy

I lived in Billings from 1976 to 1985. I attended almost every summer time Saturday night stock car race from around 1978 to 1981. Those were my 7 years to 10 years of age and were some of the greatest days of my youth. I was a huge fan of Clark Elliot. He raced the top modified class in a mid 70’s Chevy Nova. His rival was Jesse “Motate” Mota and his Chevy Camaro. I remember how clean their cars were with the “big time” sponsorship. Elliot’s main sponsor was Mountain Dew. They always ran the last race of the night. The fans were always split between those two and they could get a little rowdy as the beer had had time to soak in! I actually participated in a bicycle race there one summer day. They had different age groups and you simply pedaled one lap around. I was surprised at how rough that dirt track was when my bike tires kept getting caught in the ruts. 4th of July celebrations were a blast after the races. Very fond memories indeed. The only other race track i had ever been to at that time besides Belaro Speedway was a hardball track in Kalispell, MT. My uncle raced there for years. I remember that I didn’t like the Kalispell track because the stock cars didn’t drift like the cars did on the Belaro dirt track. I always thought it was cool to watch the back end of the car drift through the turns. I moved away from Montana and later let a decade of military service carry me away from that part of the country for good. I settled down in Kentucky and haven’t set foot in Billings in over 21 years. I actually did a GoogleEarth search of Billings recently and found what remains of Belaro Speedway. The memories just flooded in. NASCAR is king here in the south but I would take a late 1970’s Saturday night stock car race at Belaro Speedway any time over a NASCAR event! Guy M.

I have very fond memories of Belaro Speedway. Prior to me racing Motorcycles there in the late 60’s; I remember my Dad taking me there in the 50’s when it was a Greyhound Dog Race Track. It was a beautiful Facility back then. Had a Roofed Grandstands(blew off in the early 60’s from a windstorm) Box Seating area and was a very sanitary Facility.

Motorcycle and Car Races began around 1960-61. The Bikes would run on Friday Nights and Cars on Saturday through out the season. Mostly Night Racing; but a Few times in the Daylight. The Motorcycle Racing pretty much fizzled out in the 80’s; in fact I recall doing a Fireworks Display for what I’m sure was the last Flattrack Race held there in the summer of 1984. I was almost a permanent Fixture there in the Pits from 1965=73 either Wrenching on Bikes that Our Motorcycle Shop sponsored or Racing myself. The Grandstands were demolished in 2003 and The Track overrun with weeds from a few years before. The Cars always Filled the Grandstands; The Bikes always seem to have a limited audience and maybe filled half of what the Car Audience attracted. The Track had 2 Car Racing Fatalities in it’s History. No one was ever seriously injured or killed in the Bike Racing though. It was a very fun place to be back in the day;I miss the action and the old Racers; many of them gone now; it was a Big Part of My Life……Steve Matz-BSP