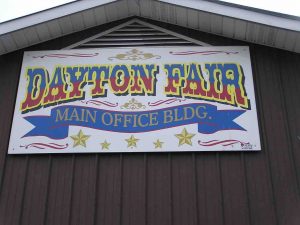 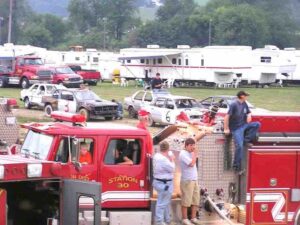 Carol and I woke up in Minneapolis, Minnesota this morning. This is what transpired today. 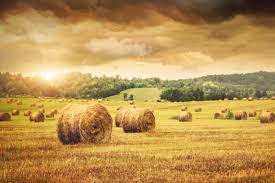 My strategy in trackchasing is to “Make hay while the sun shines.”  What exactly does that mean?  More than 80.4% of all racetrack dates happen between Memorial Day and Labor Day.  More than 90% of all county fair dates happen during July and August.

All of this is somewhat similar to the stock market.  Did you know that 50% of the market’s 10-year gain occurs on just 40 days during a 10-year trading period?  In the stock market, you don’t know which 40 days during a 10-year period are going to be the big gainers.  In trackchasing, you know that June, July and August are the big months.  A top ranked trackchaser doesn’t want to be sitting back on the block when all of these races are there for the viewing.

Now just because a race is being held DOES NOT mean it has any socially redeeming value from a racing point of view.  Tonight’s “Racing” was done by six pathetic looking four-cylinder figure 8 cars.  I’ll tell you more about it in the “Race track news” section.

I will say this.  I do not know how ANYONE can ever criticize ANYBODY regarding his or her tracks, when we count freely and without criticism what I saw tonight.  To be clear, this comment is not about counting small car count figure 8 events.  I actually like the strategy such events add to the art of trackchasing, especially when these events are held just once a year. 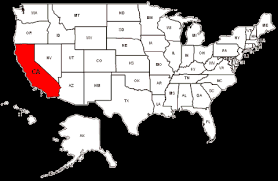 Some might think that the travel requirements of trackchasing are a bit on the extreme side.  They would be correct.  Would you do what I did to make it to tonight’s county fair?

First, Carol and I arrived into our Minneapolis hotel on Sunday night, no make that Monday morning at 2:30 a.m.  I had to sleep quickly because my wake-up call would come less than five hours later at 7:15 a.m.  With the turmoil at the airports, I wanted to arrive early for my 10:20 a.m. departure.

I showed up at curbside to check my bags with Northwest Airlines.  After lugging my two pieces of checked baggage (49.5-pound piece of rolling luggage and a 43-pound golf bag) from the rental car’s trunk to the curb, I learned I was not booked on Northwest Airlines, but United!  I hadn’t thought to recheck that little detail since I made the reservation a few weeks ago.

The United curbside baggage was too congested to check bags.  This meant I must return my rental car, and then look those two big bags as well as my rolling carryon bag and briefcase.  That’s about 150-175 pounds of luggage.  Minneapolis is one of the longest walks, no shuttle, from rental car return to baggage check-in anywhere in the country.

Baggage check-in and clearing security was a piece of cake.  My carryon luggage even cleared with an aerosol can of bug spray (thanks to the Poplar Bluff Speedway of a few weeks ago) and a cream filled tube of suntan lotion. Both of these were supposedly forbidden.

Now I had nearly two hours to kill in the airport while I waited for my plane.  My first flight today was from Minneapolis to Chicago.  That flight was about an hour and a half.  I then had a two-hour layover in Chicago.  My Chicago to Pittsburg flight was about the same length as the first.  I arrived into Pittsburg at nearly 5 p.m.

It was then wait for the checked bags, lug the checked bags to the rental car pickup area and get another Chevy Impala from National Rental Car.  Carol calls this entire process “Groundhog Day.”  She’s probably right. 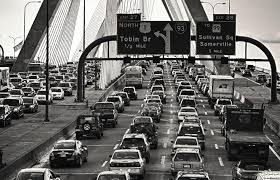 In my experience, Boston has the worst road system in and around the airport.  Pittsburgh has to rank second.  Their roads are terrible.  It was an 80-mile drive over to the track located in Dayton, Pennsylvania.  Dayton is out in the middle of #$%^# nowhere! 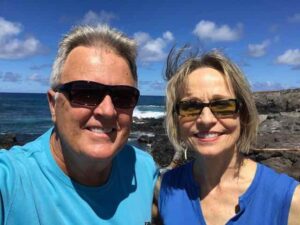 My trackchasing partner, Trackchasing’s First Mother, aka Carol headed back to California today per our plan.  Last year, I became the first trackchaser to routinely schedule and implement the “Mega” trackchasing trip.  This is a trip of nearly two weeks of daily trackchasing and sometimes longer.  During trips like this, I like to have Carol come in for 5-7 days in the middle of the “Mega”trip to break up the monotony.  During this trip, her 5 days happened at the beginning of the “Mega”trip. 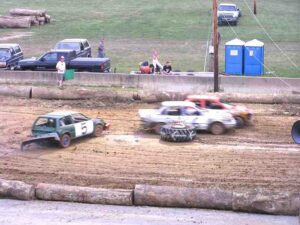 This is my 58thlifetime track in the Keystone state.  In nearly every state 58 tracks would give me a first place ranking.  However, it won’t in Pennsylvania.  Pennsylvania is home to more racetracks and more trackchasers that nearly any other state.  My 58 tracks give me a 23rdplace ranking.  I would need another 34 tracks just to crack the top 10.  That will never happen. 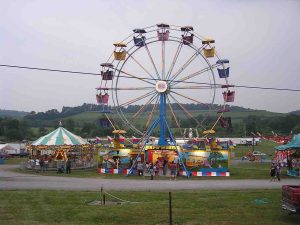 I guess I would call the Dayton Fair a medium sized county fair. I paid a $7 admission fee that included unlimited rides on all of the county fair carnival attractions as well as admission to the figure 8 races.  This sounded like a good deal.  Of course, not every good sounding deal really is.

The weather was heavily overcast.  I could feel a few sprinkles in the air.  I took my usual quick tour of the livestock barns.  I was hungry and looking for some good “Fair food.”  I don’t know if you noticed but fair food, especially at the smaller fairs, isn’t nearly as good as it used to be.

I spent several minutes assessing my choices until I finally settled on a cheese steak and Diet Coke.  This little combo set me back $9.50, which was a little pricey.  I had to just about throw an epileptic fit to get my server to not ladle on about 32 oz. of melted Cheese Whiz on my sandwich.  That would have added about 9,700 calories that were not needed.  While struggling to get the vendor’s soda ice machine to work, about a third of my “Steak”sandwich fell to the ground.  Things were not going well and really hadn’t gone well most of the day.  Maybe the racing would improve my outlook. 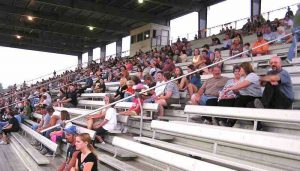 No, the racing would not improve my outlook!  I entered the large modern covered grandstand that had a seating capacity of 3,000.  It was great to see the government’s money being put to good use at a county where the median income is probably near the poverty level.  There were about 1,000 people in the stands.  That’s a lot of people for what they were about to see.

There’s just not much you can do with six cars.  Here is exactly what they did do with those six ##$%&$#^ cars.  They ran a heat race with four cars.  They ran a second heat race with the other two cars.  Some might ask, “Why not divide the field in half for the two heat races.”  Yes, that would be a good question.  I can only suspect the race organizer’s calculator was low on batteries.

This prolific spectacle of motor racing’s elite was followed by a brief intermission.  Then the four cars that were still operating ran a feature event.  Following this feature event, the two or three cars still running were supposed to run a demo derby until only one car was still moving.

To be honest with you the adrenalin rush I had received from watching two figure 8 car heat races with a total of six cars and a feature event with four cars was so much that I didn’t think I had paid enough money to also stay for the demo derby.  I departed.

I did not depart before hopping on the fair’s Ferris wheel.  I figured I would at least try to get SOMETHING for my seven bucks.  The Ferris wheel did not collapse, so I counted the evening a success.

I always say I don’t go to the tracks for the racing.  I guess that statement is not 100% true.  If all of the racing I ever saw was like tonight, I would not be a trackchaser for much longer.

The weather was cloudy and heavily overcast. At 6:30 p.m., it was nearly dark. The overcast clouds would dump a good deal of rain on the area just a few minutes after this pathetic program ended.

I will have two rental cars on this trip. One was picked up and returned in Minneapolis.  The second was picked up in Pittsburgh. 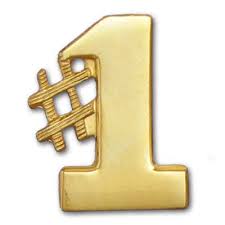 These worldwide trackchasers are within 100 tracks (plus or minus) of my current trackchaser total.

* Warning, you are within 50 tracks of being removed from this list.

These worldwide trackchasers are within 10 tracks (plus or minus) of Carol’s current trackchaser total. 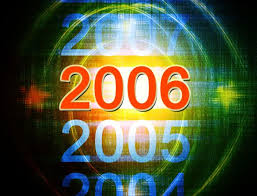 #1 Trackchaser Living West of the Mississippi

Sadly, I have several more county fair figure 8 races like this one on my upcoming schedule.