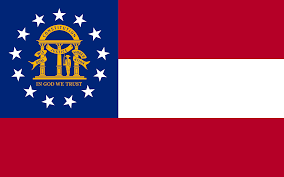 I still have the sunburn scars from Carol’s and my visit to the Atlanta International Raceway for the Atlanta 500 won by A.J. Foyt in 1971. I haven’t been down to Georgia much recently only once in the past five years dating to 2015. I saw racing on the dirt at the former asphalt track, 441 Speedway. 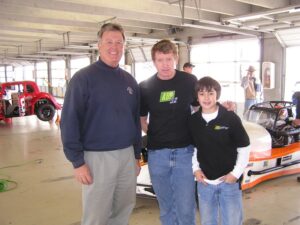 My buddy Dale Terry introduced me to Atlanta Motor Speedway track president Ed Clark, who also races thunder roadsters at AMS. Nice guys both. Dale also introduced me to NASCAR Hall of Famer Bill Elliott and his, then, 12-year old son Chase. Bill mentioned he had driven in a figure 8 race at the Evergreen Speedway in Monroe, Washington! 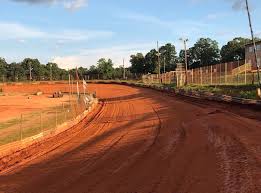 At the Atlanta Motorsports Park road course in Dawsonville, I met Jeremy the track owner. He bought the land to build the track from Bill Elliott, Dawsonville’s most famous resident. The track announcer sang the national anthem at Boyd’s Speedway. I’ve seen and heard that a time or two. At the Waycross Motor Speedway, the infield haulers blocked the view of the racing in the turns. That was bad. At the West Georgia Speedway (above), I was rained out on my first visit and a light failure nearly canceled my second trip there. Oh my. 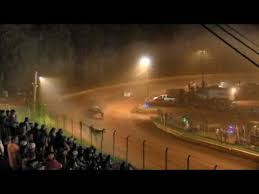 Only pole sitters won at the Dixie Speedway in Woodstock. That’s never good. Finally made it to the Georgia Karting Komplex for their Thanksgiving weekend races. They are the “World 100” of dirt karting. At the Golden Isles Speedway, the announcer told us the cars were traveling down the straightaway at 170 MPH on the half-mile dirt track! The Toccoa Speedway (above) was an oldie but goodie. It took forever to run the program and they had a terrible parking lot. 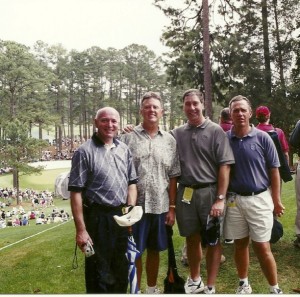 I enjoyed the Grand Prix of America in Savannah with great looking cars even though I couldn’t see much of the racing. There were some quality cars with excellent viewing sightlines at the Lanier National Speedway. The Lavonia Motor Speedway was a good southern dirt track where Schrader got fourth. I went to the Oglethorpe Speedway with fraternity brothers Phil, Mike (L-R first and third and Jim (not pictured). That track visit followed our trip to the Augusta National Golf Club, which included my good buddy George (above far right) at the Masters golf tournament. Saw a good 250-lapper at the Peach State Speedway in Jefferson. Couldn’t see much at Road Atlanta. 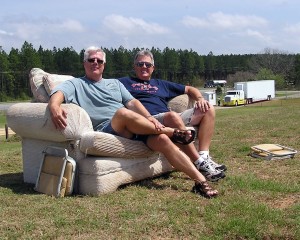 The Roebling Road Raceway reminded me of a KOA campground. The Rome Speedway was an uphill, downhill oval. Should get back there to give it another chance. At the Screven Motor Speedway, Jim Sabo and I sat on a sofa to watch the races. There was bright red clay at the Swainsboro Speedway where they’ve been racing for 40 years. I spent some time talking to Ken Schrader at the South Georgia Motorsports Park in Cecil. During my visit to the Sugar Creek Raceway, I stopped by to attend (as an observer) a KKK rally in nearby Ellijay!