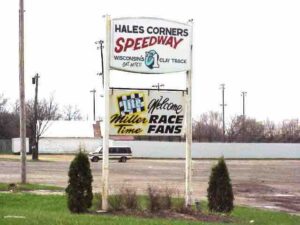 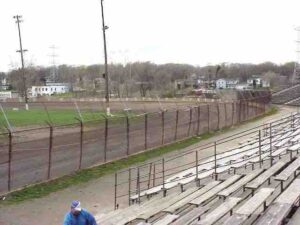 My lifetime track #129 was one of the best and lasted a long time.

I made my first trip to the Hales Corners Speedway in 1983.  At lifetime track #129 my visit was before I began writing my famous Trackchaser Reports.  I didn’t begin writing those until about track #430. 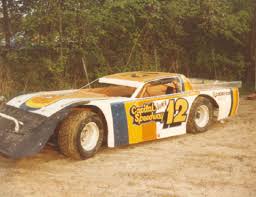 My first visit to the track was on Saturday night, April 30, 1983.  I was camping with my family at the Jellystone campground in the area.  My only written commend from that night was “Coldest ever!”.  Yes, late April in Wisconsin can be more than chilly.  Long-time track favorite Bill Prietzel in the #12 was the feature winner. 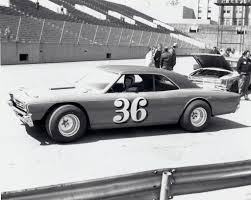 A couple of years later I returned to the Hales Corners Speedway.  I was a “racechaser” back in the mid-80s.  Heavy duty trackchasing did not come my way until later.  On a Wednesday night in mid-July I found the weather much warmer!  I had come to the track to see the World of Outlaws sprint cars race.  Steve Kinser, won the main, as he did more than 50 times when I was in the grandstands.  The night before I saw Joe Shear (#36 above) win the  ARTGO feature event (as he did frequently) at the Rockford Speedway.  Then the day after Hales Corners, on Thursday, I traveled down to the Santa Fe Speedway.  Ron Shuman in #21X won the WOO main.  As you can see back in the mid-80s I was seeing some very good racing. 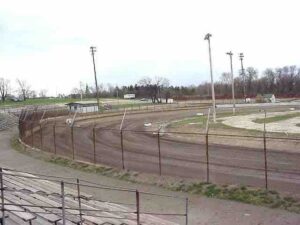 My research tells me the Hales Corners Speedway opened back on June 18, 1950.  Sadly the track closed on September 1, 2003.  Lots of tracks were opening following World War II.  Not many of them had a 53-year run.

This is what one local writer penned regarding the demise of the Hales Corners Speedway:

By Bryan Gapinski: Franklin, Wis, August 18—The Hales Corners Speedway, Milwaukee area’s only dirt race track will close after a storied 55 years of racing, on September 1, with the annual Labor Day Demo Derby. Regular Saturday Night racing will take place on August 23, and August 30. The AMA Motorcycles will run an event on Friday August 29.
Rumored to be closing for the last ten years, the facilities owner John Kaishian has sold the parcel of land to Menard Inc, a home improvement store chain. The negoiations between the two have been ongoing for over a year. Last week the pair along with the City of Franklin finalized all the plans, and the signing of the contract will be made after the September 1 event. The property is located at 6531 South 108th Street(Hwy100) in Franklin. The track’s conditions along with increased retail business’s, and new housing in the area, made the land too valable not to offer for sale.
” The end was coming, however the developments came together so quickly we were forced to forgo the Farewell Tour for the track we had hoped for” commented Jim Wehner, the track’s general manager. Wehner’s office has been over loaded with phone calls regarding the announcement. “It’s been here for so long so many people are finding it hard to believe the end has finally come” stated Wehner.
Kaishian has mentioned in the past about possibily building a new facility south of the present track. 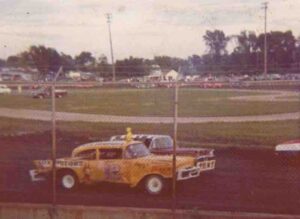 Modified and sportsmen type cars ran at the track on Saturday Nights until 1972, when the Modifieds were replaced with Late Model Stock Cars. In recent years other classes such as IMCA style Modifieds, Hales Whales, and a four cylinder class have been added. The track also hosted Thursday Night racing for many years in the 60’s, and early 70’s.
The was also the site for countless Badger Midget Series, and IRA Sprint Car Series events. The USAC National Midget Series sanctioned 36 events, and one USAC National Sprint Car Series event at the track.. The track also hosted the World of Outlaws, CRA, All Stars, and MSA Sprint Car Series. A weekly midget racing was held in the early years, and during the 1967-68 seasons. The track was also the site of flea markets, concerts, thrill shows, and tractor pulls over the years.

Do you have any experience with auto racing at the Hales Corners Speedway?

By the way you might have remembrances about this track.  If so, please feel free to share them in the comments section below.  If you have any photos from back in the day, send them to me at Ranlay@yahoo.com.  I’ll try to include them here.

My dad, Roger McKenzie, ran Precision Engineering back in the day. Just curious if anyone has pictures of any of his cars. I spent many weekends at the track growing up. He always promised to take me back into the pit when I was old enough. Unfortunately he passed before we had the chance.

Can anyone help out Nicole here? Thanks. Randy

Has Nicole checked with Pat Heaney? It’s been a while since I got any from him but as far as I know he’s the guy with all the Hales Pics. The email I have is below, not sure if it’s current.
patrickheaney2796@sbcglobal.net

My excellent stepfather and mother used to take me here on Friday nights (Saturday?) and what a blast I had every time especially during the Demolition Derby’s! Also, my stepbrother would go with us occasionally and I think we even headed over to The Organ Piper for pizza and Pacman games on special nights. Great family memories indeed.

I went to hales corner speedway once as we were camping in the area as I was growing up. Good races. I just remember a lot of beating and banging of the race cars when they were racing.

I worked at Hales Corners Speedway for several years in Security. This track would have made it longer if it wasn’t so mis managed by the owner. The place was falling apart and barely could pass a health inspection from the city. In it’s final days it was infested with drugs and heavy drinking that lead to a lot of DUI’s. I’m glad it’s gone before some one was killed but the activity off the track as well as for the junk that was always flying off the track into the stands. They will never build another dirt track like this due to the cost and the insurance that would have to be paid on it. No one wold be crazy enough to bank roll this.

Was there snowmobile races in the late 70s early 80s?

While searching some history about City of Franklin, I ran across your Hales Corners Speedway article. My grandfather Jacob Falk owned the original property. He used it to raise his heifer cows for his farm across the highway. When he retired in about 1948 from farming he leased out the farm to become the Hales Corners airport. He then sold the property that eventually became the speedway. The first year after the sale it was used for baseball fields but the second year it was turned into the race track. The original owner purchased one of grandpa’s sheds and moved it across Hwy 100 and until the closing of the track the shed was used for maintenance work. My cousin Ronnie and I attended many of the races in the early days watching the race drivers like Miles Milious. Fuzzy Fausfender and others. We also parked cars across Hwy 100 on grandpa’s lower farm property when the lot at the speedway filled up. I believe we use to charge about $.50 per car and of course grandpa left us keep whatever we collected. It was rather sad when the track was sold. I am happy that the big oak tree in the parking lot was kept. I still remember seeing grandpa’s cows resting in the shade of that big tree. Thanks for letting me put a bit of this famous part of Franklin’s history on your web page.
jerry Falk

Jerry, Great information. I love it when folks who know the back story of a particular track share it with others. All the best, Randy

I started going to the track in 1976. Got to know a lot of people there. I also drove the demo derby,and then drove in the Hales Whales. What a blast.i also helped Dave Gittens film,from there I started working for Jim Wehner.
Then moved into security for Jim wetzel.
I even tried my hand at being a flag guy for the derby. I would like to thank all that had a hand in letting me try the things I was able to do at the race track.
Just to pass this on, I have heard from many many people ,how they miss the track. I also do miss it.
The dirt track was like no others around here.
Wish someone would try to get another dirt track started before too long. I would be happy to pick up where
I left off. Until then , thanks for letting me speak my thoughts. Mike Reed