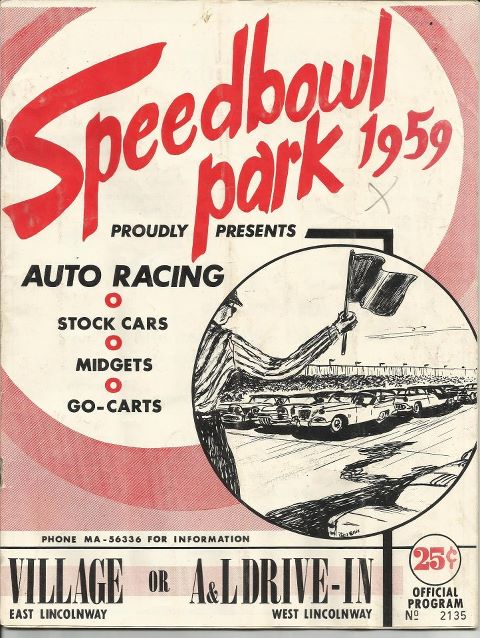 The Speedbowl Park was only the FIFTH racetrack where I had ever seen competition.  My stepfather, Bill Virt, married my mother in 1963.  He was a race fan.  He and I and some of his work friends from Caterpillar would drive up to the races from 1964-1967 or so on Sunday nights to see the races.

Sterling was where I first noticed Darrell Dake.  Darrell would become my all-time favorite race driver.  At the time he was “kicking ass and taking names” while driving a 1962 Ford convertible.  The car was white with black lettering and sported the number “8” on its side.  Later I would see Darrell Dake race his new Ford Torino at Sterling.  I bought the picture (below) while at Sterling’s Speedbowl Park.

There is some recent activity on re-establishing motorsports competition at Sterling.  However, this is not currently expected to include oval track racing.  Here’s an excerpt from the new group’s website on the history of Sterling Speed Bowl Park:

“Before Speed Bowl Park existed, the property was once an airport. It was called Speed Bowl Park Airport and was established in the early 1920’s. The first plane landed on what would be called the infield of the “old” speedway.

The park first opened in 1939 at the corner of Route 2 and McCue road in Sterling, Illinois. This featured a short half-mile dirt track for the racing of stock cars, midgets and go-karts. Over the years many racers found their way around this track until a tragedy in 1968 brought about an abrupt end of the park a few years later.”

Here are some photos from Sterling and the great drivers who raced there.  A special thanks to the folks running the NEW Sterling Speed Bowl Park for the photos I am sharing.  Fans love the photos of the old cars and stars. 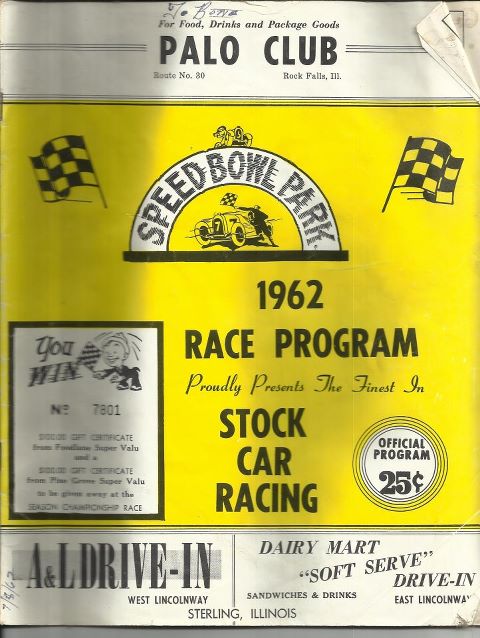 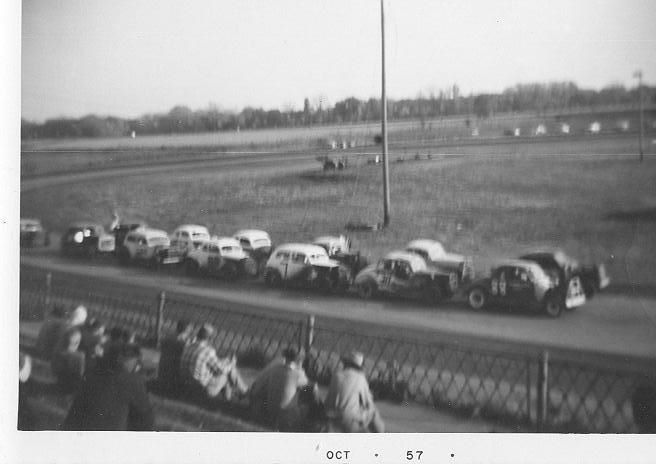 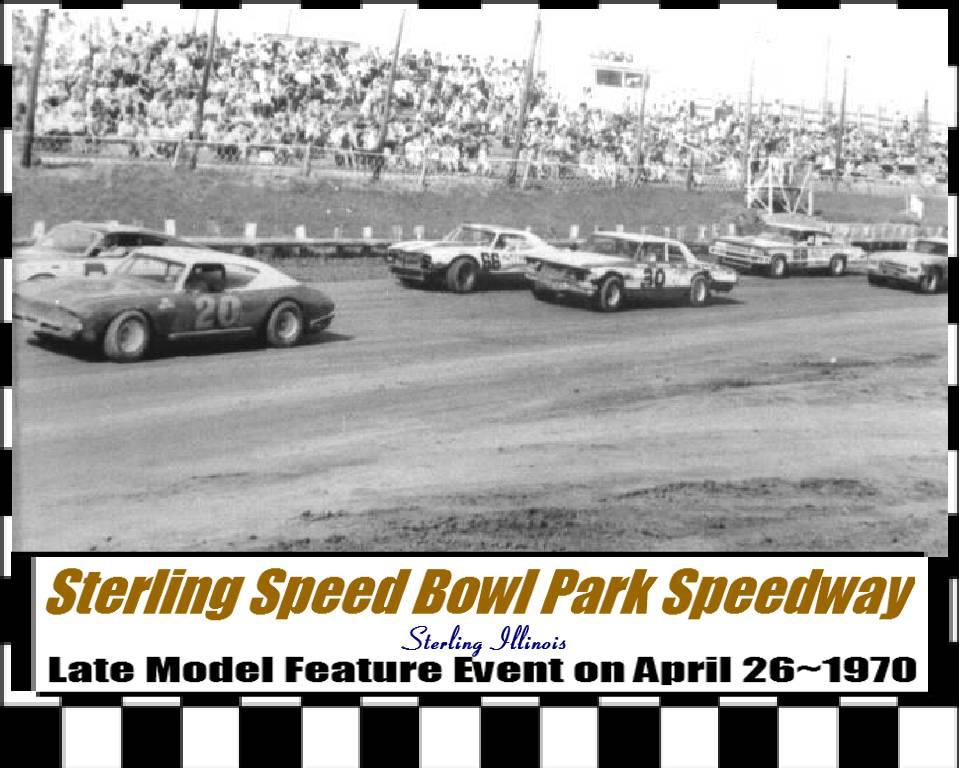 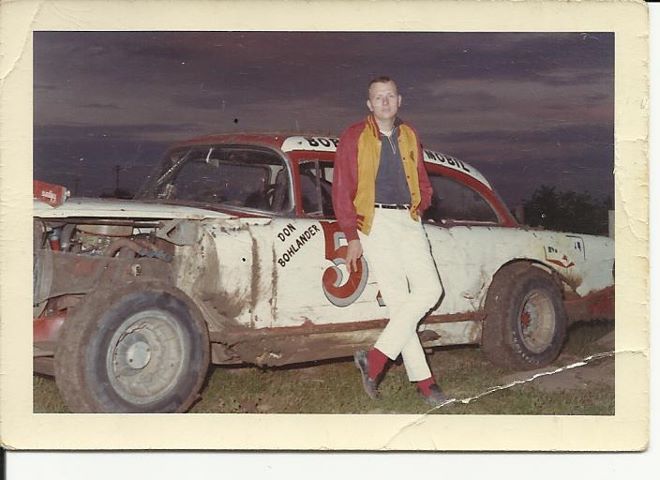 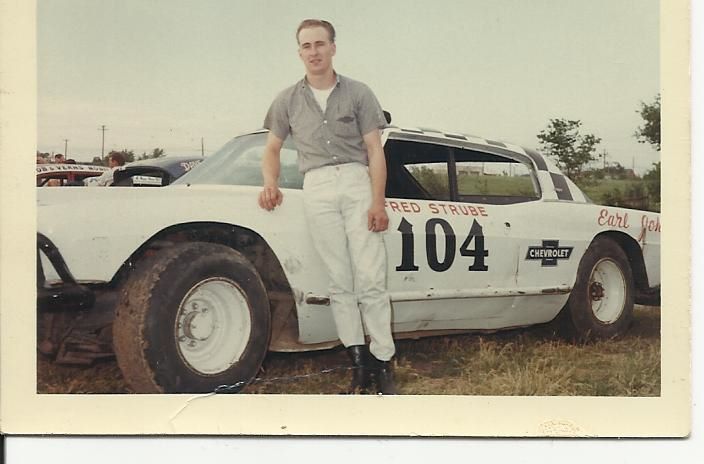 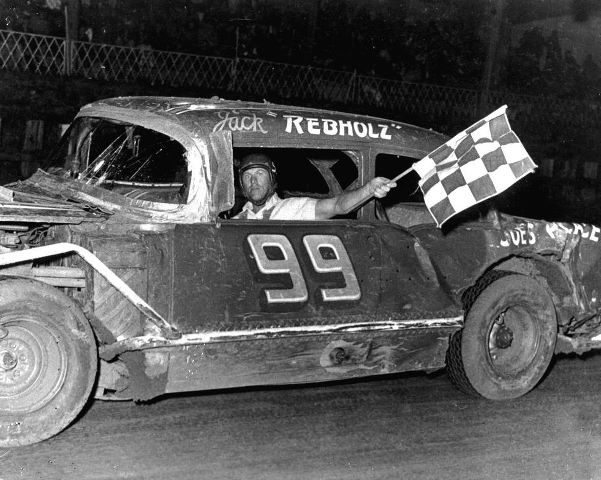 I had the pleasure to meet Jack Rebholz a few years ago at the Peoria Old Timers Racing Club Hall of Fame induction banquet. What a nice guy. He was a good friend of Darrell Dake. We spent several minutes talking. Sadly, I learned of his passing shortly thereafter.

Hopefully, someone will see your message who can help you out.

Randy, I am looking for info & pictures of Sterling Speed Bowl Flagman” Jumpin Jack” Heiman. He is currently a 2017 Hall Of Fame Nominee. any help would certainly help us out . Hall Of Fame voting is in Nov thru Dec 20 th 2016. Inductees are announced Jan 2017 . Induction Reception, Dinner, Ceremony is Sat April 8th 2017. my Email is : artfehrman@yahoo.com Thanks Art

Art, I hope someone can help you out here. Randy

For years as a Darrell Dake fan I wanted to buy a t-shirt from him. I had tons of racing t-shirts but Darrell Dake shirts were nearly impossible to find. The only one I ever saw I bought. However it was BLACK & YELLOW! What was up with that? Darrell never raced those colors. I still have that shirt some 40 years later. However, it didn’t have a picture of Darrell or any of his famous Ford racers. In one of my photos of Darrell I saw him wearing another Darrell Dake racing team t-shirt. Each time I met him I asked if he had any shirts for sale. The answer was always no.

That’s why I was so surprised and happy when I stumbled across a group out in Sterling, Illinois called “Precision City”. They had decided to make a commemorative shirt remembering SpeedBowl Park. Darrell used to dominate that track in Sterling, Illinois. Not only was the shirt to remember SpeedBowl Park but also Darrell Dake’s famous ’62 Ford convertible (the photo pictured above that Darrell gave to me and is still my most favorite). It’s shown on the front of the shirt from Precision City. A picture of Darrell in a checkered flag racing shirt is on the back.

If you are interested in this shirt check out the website at http://www.precisioncity.com. Tell them Randy Lewis sent you. If you do that and use the promotion code “DAKE10” you will get a 10% discount. Check out my Darrell Dake post on this site to see the shirt’s design.

The shirt is high-quality made by Hanes Beefy-T. I own one and love it. I will only wear it when I think I’ll be somewhere that Dake fans might appreciate it. That way it will last me longer! Whenever I wear my Darrell Dake jacket (that I had custom made) I get lots of comments. I’m sure I this shirt will start those same conversations.

This is your chance. Where else will you ever get the opportunity to buy a Darrell Dake racing t-shirt? Oh one more thing. They make a shirt with Benny Hofer pictured as well. Use promotion code HOFER10 for a 10% discount on this shirt. Good luck and if I see anyone wearing this DD shirt when I’m out on the road I’m buying lunch!

Hello. Our business made a t-shirt for Speedbowl Park with Darrell Dake for a few people around the community. If you are interested, we have them available on our site.

We also have a Benny Hofer shirt; similar look, will be listed soon as well.

We went to this race track as a kid…I am guessing 9-10…Still like to go to local tracks, now in Colorado. NASCAR fan since 1999. Been to a few NASCAR races, like the home tracks better. Wish I still had memorabilia from Speed Bowl Park. We lived in Rock Falls…it was really cool to see the Palo Club as a sponsor. I grew up just a few houses down on 10th Ave. I was in 4-H, Morrison being the county seat, we spent much time there (Hi Benny) and our girls team played softball in Como (Hi Calvin). You are correct, I loved seeing the old pictures. Thank you so much for providing the trip down memory lane!

Randy, I too grew up watching races at Speedbowl Park and my favorite driver was Darrell Dake. As a matter of fact ever since those days my favorite number is 8. I was from Morrison and my Mother and Father would take me to the races. We would go to supper at the “Y” Club across the street and then go racing. I have some pics from those days but they are mostly of wrecked cars. One of my friends dad used to race there, but Dake was still my favorite. My friends Dad was Bill Bos. Now I am good friends with another guy who raced there. His name is Ron Buckwalter. I wish the track was still open.. Thanks

Dear Mr Lewis:
I grew up just 5 miles from Speedbowl Park in the small community called Como, Ill., right outside Sterling. I can remember going to the races there as a kid. My favorite driver was Benny Hofer in the always black and white number 50. Darrell Dake was a very close second. I raced at Freeport Illinois myself and now I hear that track is closed. I currently live in Effingham, ill. and am now out of racing. My family still lives in Como and when I visit them I can hardly drive by the old Speedbowl without tearing up. What a fantastic place. If you listen real close I still can hear the engines of John Connolly, Darrell Dake, Benny Hofer, the Strube brothers and all the rest. God Bless Sir.
Calvin Myatt