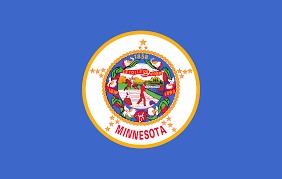 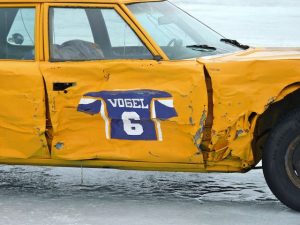 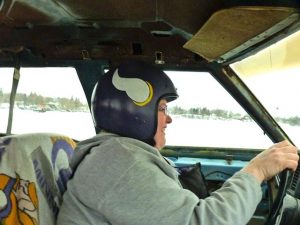 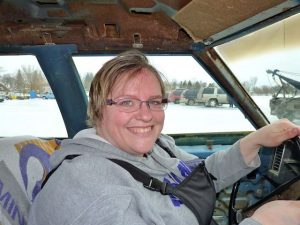 I’ve seen a lot of ice racing up in Minnesota. It gets cold up there in the winter! I rode in an ice race with Rick Hansen #81 at the 11thCrow Wing Lake Ice Track. I had one of the most fun and wildest rides with Cesca Silva (above) at the Bass Lake Ice Track. She’s a huge Vikings fan. On the way home from Bass Lake we learned that Dale Earnhardt Sr. had been killed at Daytona. 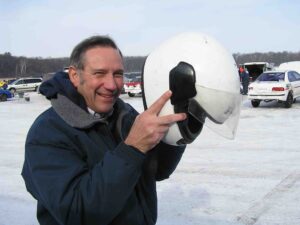 At the Brainerd International Raceway Ice Track I gave my ice race ride invite to Ed Esser. He had never done such a thing and had a blast. At the Cameron Lake Ice Track they don’t race with helmets! Carol rode in the “B” main with those crazy folks. At the Crosslake Ice Track they use a blue flag instead of a white flag so the flag can be seen better on the ice. I got stuck in the snow-filled parking lot at the KIR – Kimball Ice Racing track but a couple of friendly Minnesotans (aren’t they all?) came to the rescue. I flew straight from Doha, Qatar to the ice racing at Lake Washington in Mankato. Really good ice racing at the Peterson Lake Ice Oval with 60 cars in three classes. I’ve seen ice racing at more than 20 locations in the North Star state. 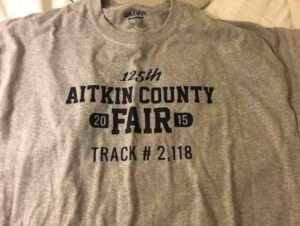 The folks at the Aitken County Fairgrounds gave me a nice personalized trackchasing souvenir t-shirt. We also did a newspaper interview and an at the track interview in Aitken. The Bemidji Speedway reminded me of my all-time favorite track the Peoria Speedway. Saw a fun county fair enduro at the Big Stone County Fairgrounds with Rob and Emily Palmer. I waved the green flag over the road hog feature event at the Buffalo River Speedway. 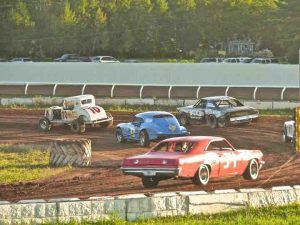 Really good vintage racing (above) at the Carlton County Fairgrounds. Met up with trackchasing fellow competitor Andy Sivi at the Elko Speedway, one of the best race facilities in the state. Andy was one of the all-time best trackchasers in his prime. I’ve seen four countable tracks there. I saw Terracross racing at the HayDays Dirt Course in North Branch. Not many people ever got to see Terracross racing before their demise. 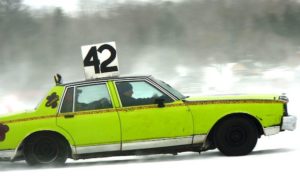 Saw some great stunt shows during the race program at the Isanti County Fairgrounds. Wanted to see racing at the Jackson Speedway for years but when I did I felt the track was much too big. I won a Quaker State duffle bag at the K.R.A. Speedway. More no helmet racing (above) at the Garfield Lake Ice Track. Watched the racing at the Greenbush Race Park up near the Canadian border with Rob and Jacob Palmer and was in the Santa Maria Speedway (California) parking lot the next morning for their kart racing and my first meeting with track promoter Chris Kearns. 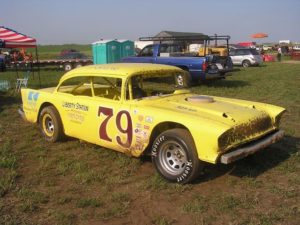 Saw some fantastic vintage racing (above) with daughter Kristy at the Little Log House Speedway. A racer crashed into a parked farm tractor outside the track at the Mahnomen County Speedway. The race at the Minnesota State Fairgrounds started with 30 laps run under caution due to a wet track and then got rained out. Had to count the track because the race had already “started”. At the Murray County Speedway the fans stand and applaud BEFORE the start of each feature race. Folks….only in Minnesota home of the “NIMS” people. 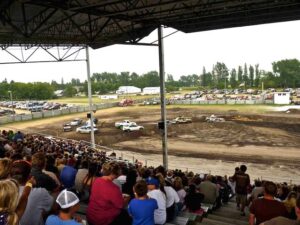 Did an outstanding radio interview at the Norman County Raceway with DJ Jim at KRJB 106.3 FM radio. Saw one of the best autocross novelty shows we’ve ever seen at the Olmstead County Fairgrounds. Eighty-two cars showed up for the Baja racing (above) at the Polk County Fairgrounds. In the midst of the racing the program was canceled by a tornado at the Princeton Speedway. Gotta get back there! 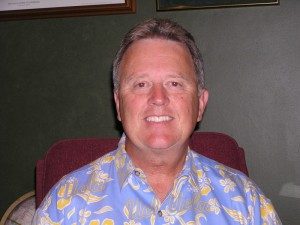 The Raceway Park in Shakopee was a “top 10%” track. Really good junk car racing with 60 cars at a small town just eight miles from the Canadian border at the Roseau County Fairgrounds. Outstanding hospitality from those folks. A fan took my camera bag, thinking I had left it behind when I hadn’t, at the Steele County Fairgrounds. I had to backtrack a distance of 200 miles to get it back. No good deed goes unpunished! Got a color photo (above) and excellent trackchasing story in the Morris Sun Tribune for my visit to the Stevens County Fairgrounds. There were 350 laps of big and small car enduro racing at the Waseca Fairgrounds. I’ve eaten my share of cheese curds in Minnesota and enjoyed the ice racing locations provided by the Central Minnesota Ice Racing group. I continue to be very impressed with the people of the great state of Minnesota.